India to expand presence in the Andamans 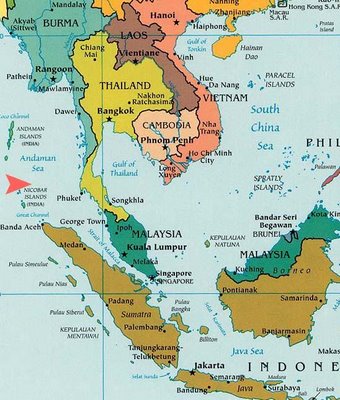 India will soon start a major expansion of its military presence in the remote Andaman and Nicobar Islands, a year after the Asian tsunami wrecked defence bases there, a top commander said on Thursday.

The plans include construction of three new air bases to add to the one existing base, increasing coast guard troop levels and strengthening infrastructure at old facilities in the strategically vital archipelago in the Bay of Bengal.

"Our expansion plans are totally transparent and the defensive measures are being taken to ensure the safety and security of the islands only," said Vice-Admiral Arun Kumar Singh, commander-in-chief of the Andaman and Nicobar Command.

"We have found an unused 3,000-feet (900-metre) World War Two runway in very good condition in Kamorta (island), which we are planning to develop soon," Singh told Reuters by phone from Port Blair, capital of the island group, referring to one of the three new air bases planned.

Two other air bases would be built in Diglipur and Campbell Bay after small airstrips there are lengthened to handle large transport and fighter aircraft, he said.

The Andaman and Nicobar islands are located about 1,200 km (750 miles) east of the Indian mainland, close to the Malacca Strait, the main sea lane between the Indian Ocean and the South China Sea leading to the Pacific.

India has an air and naval bases and listening posts across the archipelago as it considers the sea routes vital to its security and to guard against what some defence experts say is China's increasing interest in the region.

Sea routes in the region are known to be used to ship weapons destined for rebels in northeastern India, Myanmar or Bangladesh and drug smuggling. They are also prone to smuggling, piracy, poaching and illegal immigration.

And India is not alone in securing some outlying posts. Indonesia is sending some marines to secure islands it claims as reported here:

The Navy is ready to dispatch marines to secure six outlying islands it fears could be claimed by Indonesia's neighbors or be sold illegally to foreigners.

Marine Corps commander Maj. Gen. Safzen Noerdin said Wednesday forces were ready to be dispatched to the islands at any time should Indonesian Military chief Gen. Djoko Suyanto give the order.

The troops would be deployed at Rondo island north of Aceh; Berhala island bordering Singapore and Malaysia; Sekatum in the Strait of Malacca; and Marore and Miangas islands in Northern Sulawesi, Antara reported.