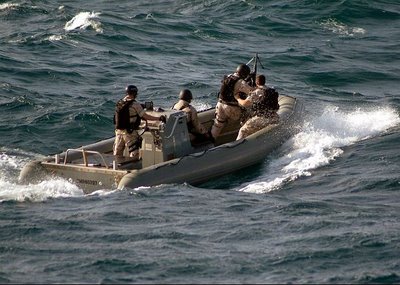 More details on the Somali pirate adventure with a Navy cruiser and destroyer found in The Virginian-Pilot:

When suspected Somalian pirates opened fire on two small Navy boats just after dawn Saturday, the captain of the cruiser Cape St. George, waiting a few hundred yards away, had his gunners lay down covering fire long enough to allow the Navy crews to escape.

“From there, it evolved into a surface action, where the suspected pirates started shooting back at us, raking down our side,” Capt. James Russell Yohe said by telephone Sunday from the Indian Ocean near the Somalian coast. That was where the attack on the Norfolk-based Cape St. George and destroyer Gonzalez, along with two small boats the Gonzalez had sent out to investigate the suspected pirates, took place.

Yohe said he ordered his ship to full speed to get ahead of the three pirate vessels and gain an angle advantage so as not to hit the destroyer Gonzalez or its two small boats.
Nine sailors were in each of the 24-foot rigid hull inflatable boats, or RIBs as they are known.

The Gonzalez also fired at the larger pirate vessel, a 40-foot diesel boat, hitting a 55-gallon drum of fuel and setting it on fire, Yohe said. The crew aboard that boat dove off, he said.

At the same time, the Cape St. George was engaging the two smaller, high-speed gas-powered boats with its machine guns, he said.

“I was simply amazed they were firing at us, to be so bold as to actually continue the engagement,” Yohe said as he discussed the open-sea battle that left one suspected pirate dead and 12 under arrest. Five of those arrested were wounded.

“I can tell you, we have some footage that I think will resolve that,” he said . “… It will clearly show the suspected pirates firing at the Gonzalez RIB crew first.”

Yohe said his ship spotted the larger diesel boat towing the two smaller skiffs in the pre-dawn darkness Saturday. The decision was made to await sunrise before inspecting the vessels, Yohe said, and the Gonzalez and Cape St. George shadowed the suspects from a distance.

Yohe said he did n ot think the suspects knew that the Navy was there until just after sunrise.

“When the Gonzalez RIB crews approached, the suspected pirates started brandishing rocket-propelled grenade launchers, and they opened up on the RIB crews,” Yohe said.

“The RIB crews returned their fire and maneuvered. At the same time, gunners on our ship actually laid down covering fire to keep the pirates’ heads down so the Gonzalez RIBs could get out of the way and keep clear.”

It wasn’t long before the pirates surrendered.

“I was very proud of my crew today,” Yohe said Sunday . “They responded with what I considered appropriate force, and once the suspected pirates started waving their arms and we could tell they were giving up, they ceased firing and everyone stopped firing.”

Earlier posts on this affair here, here and here.

Update: Photo of RIB with boarding team is from an earlier encounter with pirates off Somalia (Caption: A boarding team from the Arleigh Burke-class guided missile destroyer USS Winston S. Churchill (DDG 81), approaches a suspected pirate vessel to conduct a boarding and inspection at sea, Jan. 21. All U.S. Navy photos by Chief Information Specialist Kenneth Anderson.) Used to provide an idea of what this group of pirates first decided to shoot at.

UPDATE: A probe to be launched:

The U.S. navy is investigating a shoot-out that occurred Saturday in the waters off the coast of Somalia between two of its ships and a group of Somali gunmen suspected to be pirates.

Twelve suspects are being held by the U.S. navy. One gunman was killed during the exchange of gunfire.

VOA was unable to contact the suspects for comment. A spokesman for them, Saleban Aadan Barqad, was quoted in press reports as saying they were protecting fishing stocks from being seized by foreign vessels, and says the U.S. navy opened fire first.

Somalia's State Minister of Parliament and Government Relations Abdurahman Ibbi tells VOA he has no doubt that the men were pirates. He says he is happy with the U.S. Navy for stepping in.

"When I heard, actually I was so happy with it, and I am grateful actually of hearing such things," said Ibbi. "These are pirates, and nobody has done anything against them, and now I am glad that we have got some people at least who are thinking of us."

Lieutenant Commander Brown describes to VOA the U.S. navy's version of the incident involving the USS Cape St. George and the USS Gonzalez.

"We spotted these vessels. They were operating in a pattern that has been consistent with previous pirate attacks," he said. "Because of the location they were operating in, because of their operating pattern, we were preparing to go over and do a routine boarding. We were in international water and that is under international law. We went to do that, and as we went to do that, they opened fire on the navy sailors."

I note the VOA has not reported CAPT Yohe's comments and has edited out the threats by another member of the same "militia" as Baqad:

Geraad Mohamud, from the same militia group, said they would kill any hostage they capture and would attack any ship unlawfully plying Somali waters unless their men were released.

UPDATE2: Someone seems a bit unhappy:

On Saturday March 18, the USS Cape St. George and USS Gonzales opened fire on Somali vessels inside Somali coastline, killing one while taking others into custody.

The office of the Somali Justice Advocacy Center received calls from Somalia, and therefore asks the U.S. government to release those in detention and offer an accurate explanation about the details of the incident.

"This is not the first time the U.S. navy violates the sovereignty of the Somali coastline," said Omar Jamal, the executive director of the Somali Justice Advocacy Center.

The office of the Somali Justice Advocacy Center believes that there was neither any serious provocation from the Somali vessels nor any legality of the presence of the U.S. Navy inside Somali coastline.

I guess getting your people shot at isn't "serious" provocation and, as noted in an earlier post, 25 miles is not inside Somali territorial waters.

In 2002, the Somali Justice Advocacy Center described itself:

SJAC is a non-profit organization that has been active in the light of September 11th advocating for the Somali Community in the Twin Cities area. SJAC has helped to organize vigils to support the Hawalas (money wiring services) when they were shut down by the U.S. Customs Service, highlighting the devastating economic effects that this would have on Somalis' families back home. SJAC has also been active in supporting victims of police brutality and especially the recent killing of Abu-Kassim Jeilani on March 10th of this year.

SJAC's director also expressed concern about the movie "Blackhawk Down":

"The Somali people are depicted as very savage beasts without any human element," said Omar Jamal, executive director of the Somali Justice Advocacy Center in St. Paul, Minn. "We don't know what Americans will think of us Somalis after they watch this movie."

Jamal said at least 25,000 Somalis live in Minnesota, the largest number in any U.S. state.

"The community is shocked and really afraid of the consequences of this movie," Jamal said after he and several colleagues saw a private screening. He called the movie a "big psychological setback" to the group's efforts to demonstrate to Americans that the Somali community supports the war against terrorism.

I agree, all Somalis should not be judged by the actions or words of a few (or even by the actions and words of the director of SJAC). And, just so you know, this last section was revised slightly after re-reading the referenced article. My apologies for any inconvenience.
Posted by Mark Tempest at 3/20/2006 07:51:00 AM