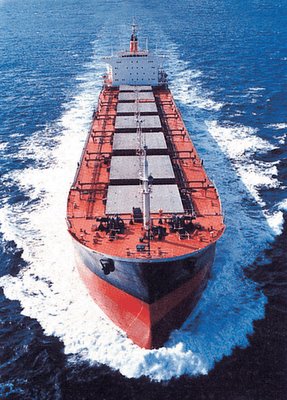 A Panamanian-registered ship sank in the Malacca Strait in southern Malaysia after colliding with another vessel, but all 24 crew members were rescued, authorities said.

The accident occurred on Friday morning about 20 kilometres southwest of Undan island in the southern Malaysian state of Malacca, the Peninsular Malaysia Marine Department said in a statement issued through the national news agency Bernama.

Twenty-four Ukrainians were rescued after their cargo ship sank following a collision with a South Korean vessel in the Malacca Strait off Malaysia, marine officials said Saturday.
The Panamanian-registered MV California with its Ukrainian crew was en route from India to China when it collided early Friday with the container ship the MV Sinokor Seoul, said officials.

The accident took place some 11 nautical miles from an island near Malaysia's southwestern coastal state of Malacca, which faces the strait.

"When the collision happened, water was pouring into the ship, so all the members of the crew used their lifeboats and were then rescued by the Sinokor," an officer with Malaysia's southern marine police told AFP.

He said the Sinokor, which suffered some damage, had 25 crew members, comprising 18 Koreans and seven Filipinos, and was traveling from Malaysia's western Port Klang to Singapore.

No reports of any blockage of the strait caused by the incident.