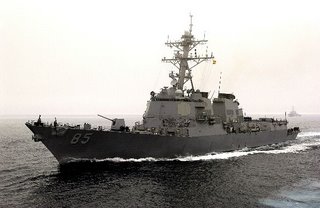 Rokya 1 and McCampbell, an Arleigh Burke-class guided-missile destroyer, both received damage on the bow and are deemed seaworthy. The cause of the accident is under investigation.

Kiribati is part of the Gilbert Islands (along with Tarawa) in the South Pacific. It's not on the list, but I suspect that Kiribati is a "flag of convenience" country...