US Navy off Gulf of Guinea 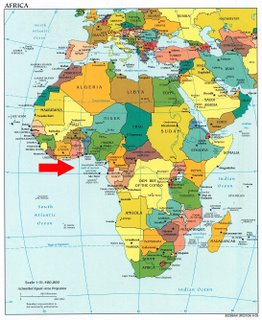 The visiting Commander of the US Naval Forces in Europe, Admiral Henry "Harry" Ulrich, has pledged more "activity and visibility" by the US Navy in the Gulf of Guinea as a way of firming co-operation between America and nations of the region.

Admiral Ulrich arrived in Nigeria on Monday from Ghana, where he attended a conference between the Gulf of Guinea nations and the US on ways of securing the region, at the Kofi Annan Peacekeeping Institute in Accra.

"Also, a couple of thousands of ships come from the US to the Gulf of Guinea, and across to the Far East. So, all nations have vested interest in knowing the history of ships plying the region and what they carry. We have to work together to share information. We are looking forward to recommendations on the way forward," he added.

Admiral Ulrich also confirmed that the US has two ships in the region - one in Accra, Ghana and the other in Congo - to help the region's navies in "terrorism training".

With the situation in the Middle East, the US is looking more and more to Africa - especially the Gulf Guinea - for its oil supply, necessitating increasing interest in the security of the area especially amid rising terrorism in the world.

US dependence on oil from Africa is expected to increase from the 18 per cent of US net oil imports recorded in 2004, as new oil fields are brought on line in the Gulf of Guinea.

The visiting US Commander also asked the Nigerian military, particularly the Navy, to keep its "gates of communication" wide open in order to share information with the US Navy for mutual benefit.

Red arrow on map points to Gulf of Guinea.

Nigeria is a major oil supplier to the US (and the world). Some fear a quagmire if the US intervenes in Nigeria because of political unrest. Some might see this as a precautionary step in the Oil War.