Sea lanes and the Philippines, Malaysia and Indonesia 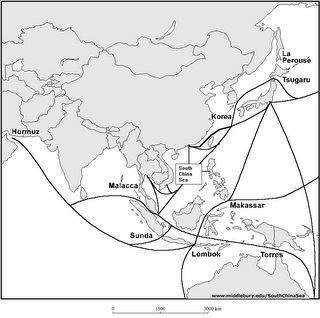 Sea lanes and the threat of terrorism are on some regional minds as reported here:

The Philippine navy and its counterparts of Indonesia and Malaysia are set to establish securesea lanes in a bid to strike terrorists, pirates and international criminals in international waters, Defense Secretary Avelino Cruz said on Monday.

Cruz told reporters that a "close watch south" program will be launched in the next few months, using the traditional sea routes linking Mindanao Island, southern Philippines to Indonesia and Malaysian archipelagos.

"If any sea vessel get out from the required sea lanes linking Philippines, Malaysia, Indonesia down south to Australia and New Zealand, it will be strictly inspected and searched," said Cruz, as he stressed the importance of tight joint sea border patrol to apprehend potential terrorists and pirates preying on big commercial and passenger ships in international waters.

An older post on vital sea lanes for Asia here. 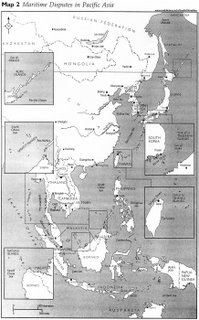 Top map is of major Asian sea lanes (attributed to US Pacific Command). Lower map is of vital sea lane areas in dispute in the region. Links to both found here. China, of course, is very interested in keeping its vital sea lanes open...