Following up on Star Princess fire 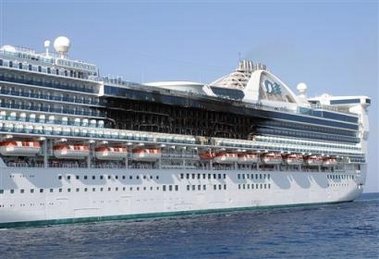 Many passengers awaiting flights home from Montego Bay praised crewmembers' response to the fire. The company said it would refund the cost of the vacations for all 2,600 passengers and offered a 25 percent discount on their next cruise.

"If we did go on a cruise, we'd go on Princess," Beth Bostrom said. "We were impressed with them."

Richard Cox, a passenger who awoke to the smell of smoke, said the crew made passengers feel safe.

"You could see the lifeboats, they were getting them ready to go. That's when I knew there was something really important," said Cox, of Mason, Ohio. "When I saw that I went 'Oh boy, we're really going to go off the ship.'"

But the passengers did not abandon ship. Instead, they waited in designated safety zones for several hours, as they are instructed in the emergency drills that are required for all passengers at the start of a voyage. The ship then made its way to Montego Bay and canceled its final stop on a private island in the Bahamas.

A smoldering cigarette is suspected as the cause of the fire, but Princess Cruises spokeswoman Julie Benson said authorities were still investigating.

For those interested in such things, the images are from the Princess Cruise web site (main site for this ship here) and show some of the cabin locations involved. 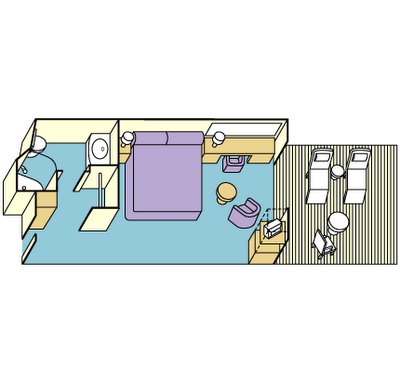 we have an occasional correspondent in the intelligence business, and last night she contacted us with an intriguing idea from the murky shadows of spookdom. Apparently certain elements in the intelligence community are convinced that Al Qaeda has taken an interest in cruise ships as targets after the attempted pirate attack on such a vessel off the coast of Somalia last November.

I guess the Baron has not been following the arrest and trial of the putative cruise ship bomber in Turkey. See here, here and here.

UPDATE2: Shipboard fire safety standards have changed, but the apparently intentionally set 1990 fire on the Scandinavian Star that killed 158 is instructive:

The reasons for the very large loss of life
a). SOLAS Requirements
The Committee found that in principle the Scandinavian Star complied with those requirements in SOLAS 1960 and SOLAS 1974 that a ship built in 1971 was supposed to comply with. However they did find the following deficiencies in the ship and its equipment:

workshops and stores had been set up on the car deck
some of the sprinkler heads on the car deck were blocked with rust
pressure bottles were stored incorrectly
there was a defective fire door on the port side of the car deck
the motorised lifeboats were generally in poor repair
a fire door was missing from the aft starboard part of Deck 6 and the door opening had been fitted with a glazed door
three alarm bells were missing from the fire alarm system
These deficiencies were generally not significant, apart from the missing alarm bells which I shall discuss in the next section.
b). The fire alarm system
The fire occurred while many of the passengers were asleep in their cabins. Consequently the fire alarm system was important in arousing people from their sleep.

As a result of the missing alarm bells it was found that only in about 37% of the cabins was the sound level of the alarm over 68 dB, which was considered to be "probably sufficient". In addition, as buttons had to be held down on the Bridge to maintain the sounding of the alarm, the alarm was not sounded for long enough periods