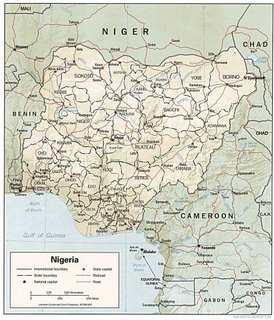 Internet forums close to the al-Qaeda network have claimed responsibility for guerilla operations against foreign oil companies in the Niger Delta in Nigeria. In an apparent link between international jihadi groups and the ongoing unrest in the oil-rich African nation, the websites have published photos of nine employees of the US petrol company Willbros, kidnapped on 18 February. Their captors are guerillas fighting to force foreign oil companies to abandon the area and ensure the income from the industry is detinated to the local Ijaw ethnic group.

Kinda fits into the "attack the oil" plan laid out by al-Zawahiri as reported in this interesting piece here:

In a third theme, al-Zawahiri urges Muslims to attack the West. He says that those attacks should hurt the West economically: "[Muslims have to] inflict losses on the crusader West, especially to its economic infrastructure with strikes that would make it bleed for years." Al-Qaeda has for some time focused on the West's economy as one of its key areas of vulnerability. See, for example, the video that bin Laden released just before the 2004 election, in which he trumpeted his "bleed-until-bankruptcy plan" for defeating America.

A fourth theme emerges naturally from that: the importance of oil. Al-Zawahiri describes the alleged theft of Muslim oil by Western countries as the "biggest robbery in history." I've written in the Weekly Standard about al-Qaeda's interest in disrupting the oil supply; since then, al-Zawahiri expressly called for attacks on Gulf oil facilities in a December video. (See also Evan Kohlmann's post on al-Qaeda in Saudi Arabia issuing rules for attacking oil facilities.)