The future of "Big Oil?"

National oil companies increasingly are using a "might and market" strategy to outbid multinational majors for oil and gas reserves, said Joseph Stanislaw, a cofounder of Cambridge Energy Research Associates...

His view of "might" is the mobilization of national governments' economic power, he told participants at the US Energy Information Administration's 2006 energy outlook conference.

"Combine that with a large market and you have an entity that not only aggressively pursues oil and gas but is willing to pay more than anyone else," Stanislaw said.

He said he first heard of this strategy at the 1997 World Petroleum Congress in Beijing when China's president and prime minister each quietly signaled the country's intention to aggressively secure supplies. 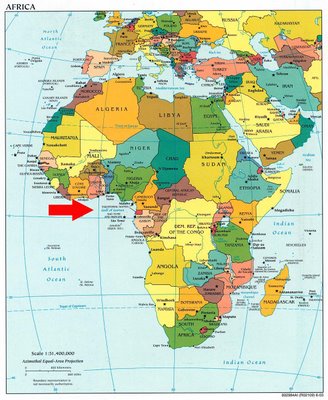 And speaking of oil, the US and Nigeria are a current topic as seen here:

Militants claiming to fight on behalf of a disenfranchised Niger Delta ethic minority released three foreign oil worker hostages Monday, but vowed to continue their three-month sabotage campaign that has cut Nigeria`s daily oil exports of 2.5 million barrels by a quarter and contributed to international oil prices jumping to over $60 per barrel.

Although Nigeria`s pipelines have long been vulnerable, the stakes have been raised as the United States increasingly depends on West African oil.

A surging energy demand in Asia and volatile climates in the Mideast and Latin America first prompted the Bush administration to call West African oil a 'strategic national interest' in 2002 -- a label that freights the use of force to secure and defend such interests if necessary.

Nigeria stands as the fifth-largest supplier of oil to the United States, with 35.9 billion barrels of proven reserves. The shorter distances American tankers must travel to pick up crude that is both lighter and 'sweeter' than the Mideast variety has moved U.S. energy officials to stake the Gulf of Guinea will provide a quarter of U.S. crude by 2010.

This would place the region in front of Saudi Arabia as a leading oil supplier. Other major producers in the region include Equatorial Guinea, Angola, Gabon and Congo-Brazzaville.

You might recall that the commander, US Naval Forces Europe has begun shifting Navy focus to Africa as posted here:

...U.S. naval forces in Europe are in the midst of fundamental reform to deal with a rapidly changing strategic environment shaped in part by military concerns about terrorist activities across in Africa, more demanding U.S. maritime security requirements and a growing U.S. dependence on West African crude oil.

U.S. military leaders have pointed to Africa as an incubator for terrorists. Gen. James L. Jones, NATO commander, told Seapower in 2004: “In Africa, there are clear signs of fundamentalists taking root and fomenting all kinds of problems for the future.”

Adm. Mike Mullen, chief of naval operations, said in January: “We’ve captured what we believe are some pirates off the Horn of Africa. There is piracy in lots of places. There is drug trafficking. There is weapon trafficking. There’s illegal immigration. … It’s the full spectrum.”

This is particularly worrisome, said Ulrich, because, “A lot of shipping is coming from … Africa, either around the Cape [of Good Hope] or originating in Africa.” One of his goals is “to have better awareness of where that shipping is coming from [and] what it’s doing, and to be able to provide that information back to the East Coast of the United States.”

Achieving that end will require partnerships with nations in the region. Ulrich is working with “the maritime forces on the west coast of Africa” to improve their security, surveillance and policing capabilities “so they know what’s going through their waters and what’s originating from their ports.”
****
He noted two advantages of crude from West Africa.

“It is very easy to load up to a tanker and pop straight across to the [U.S.] Gulf Coast market, one of the most important crude markets in the world. West African crudes have become a swing crude between the Atlantic and Pacific basins. Wherever the prices are best, the crude can flow either way, east or west,” Qureshi said. “It tends to be high-quality crude, it’s easier to process, it produces more of the clean products we need more easily, so it’s more valuable.”

Illegal pilfering of oil is a problem, especially in Nigeria.

“Generally, all sorts of pirating is going on,” Qureshi said. “A lot of puncturing of pipelines. About 20 percent of Nigeria’s crude production right now is offline because of ethnic and criminal unrest going on in the Niger Delta. The communities in the Niger Delta are extremely unhappy about the distribution of revenues within Nigeria, and we’ve seen increasing willingness to express that though violence directed specifically at the oil industry.

“If significant volumes are taken offline in Nigeria, that can affect the price [of oil], especially if the market is tight anyway from other factors around the world,” he said.

Also see this on the US Navy operating in the Gulf of Guinea, which is bordered by the countries of Nigeria, Angola, Chad, Equatorial Guinea, Gabon, and Sao Tome and Principe.
Posted by Mark Tempest at 3/28/2006 09:24:00 AM