Iran threatens the Strait of Hormuz and its neighbors--and this time they've got a plan! 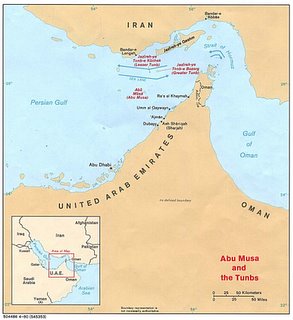 Iran is thinking big and looking to take advantage of its strategic geographic position to plan tactics that may close the Strait Hormuz as reported by Kenneth Timmerman here (hat tip to El Jefe at Kingdom of Chaos). Mines, missiles, minisubs, Oh, my!

The Iranian contingency plan is summarized in an "Order of Battle" map, which schematically lays out Iran's military and strategic assets and how they will be used against U.S. military forces from the Strait of Hormuz up to Busheir.

The map identifies three major areas of operations, called "mass kill zones," where Iranian strategists believe they can decimate a U.S.-led invasion force before it actually enters the Persian Gulf.

The kill zones run from the low-lying coast just to the east of Bandar Abbas, Iran's main port that sits in the bottleneck of the Strait of Hormuz, to the ports of Jask and Shah Bahar on the Indian Ocean, beyond the Strait.

Behind the kill zones are strategic missile launchers labeled as "area of chemical operations," "area of biological warfare operations," and "area where nuclear operations start."

Iran's overall battle management will be handled through C4I and surveillance satellites. It is unclear in the documents shared with NewsMax whether this refers to commercial satellites or satellite intelligence obtained from allies, such as Russia or China. Iran has satellite cooperation programs with both nations.

Iran plans to begin offensive operations by launching successive waves of explosives-packed boats against U.S. warships in the Gulf, piloted by "Ashura" or suicide bombers.

In recent years, the Iranians have used these small boats to practice "swarming" raids on commercial vessels and U.S. warships patrolling the Persian Gulf.

Of course, there is more and that "more" includes specific references to missiles, submarines and mines that have been identified in a variety of sources as being owned by the Iranians. On the other hand, there isa vast difference between having a plan and the ability to carry out that plan (for an amusing example, almost any episode of "Pinky and the Brain" -plans for world domination don't always work out) . Especially if your plan has been leaked. Or maybe this is just one more step in a disinformation campaign akin to the North Korea recurring threat to create a "nuclear sea of fire" against their daily enemy list.

In fact, the whole approach of the rogue governments of the DPRK and Iran seems strangely similar and designed to sow panic in the camp of the enemies.

However, just to keep track, I offer up some older posts that have dealt with Iran. Here is a post on the Silkworm missile threat to the Strait of Hormuz. This is a starter on the possible Iranian use of merchant hulls for nefarious purposes like weapons delivery. A brief note on the Russians upgrading Iran's KIlo class subs to launch cruise missiles from torpedo tubes here, Bubblehead has info on the Iranian minisubs here (with pictures). Chap has a nice piece on how messy this situation is here (H/T: Bubblehead). And a post on the same threat, made in January, but with some important links and things here. UPDATE: Iran's new missiles? And some thoughts on "speed boat" terrorists here. (Somewhere in my archives was a reference to the Japanese using suicide boats along with their suicide airplanes in WWII, but I can't find it right now and I've got a whole lot on my plate...maybe later.)

I trust the leadership of Iran has paid up their life insurance premiums so that their families might be taken care of if this situation escalates...
Posted by Mark Tempest at 3/05/2006 09:51:00 PM