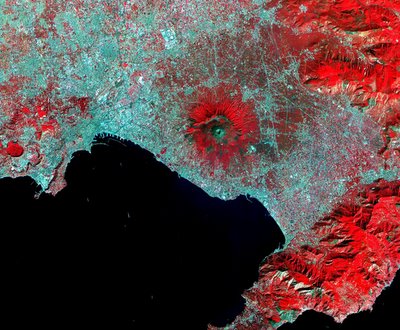 Having spent some time in the volcano dense area that is Naples, Italy, I take this Vesuvius risks 'underestimated' very seriously.

In my view, Naples is not ready for the next "big one."

I'm not so sure we're ready in San Franciso or LA for something big either...

Photo is from here. You might note the urban build up around the volcano and the limited paths out of the area...

This Advanced Spaceborne Thermal Emission and Reflection Radiometer (ASTER) image of Mt. Vesuvius, Italy was acquired September 26, 2000. The full-size false-color image covers an area of 36 by 45 km. Vesuvius overlooks the city of Naples and the Bay of Naples in central Italy. (Popocatepetl and Mount Fuji are other volcanos surrounded by dense urban areas.) In 79 AD, Vesuvius erupted cataclysmically, burying all of the surrounding cites with up to 30 m of ash. The towns of Pompeii and Herculanaeum were rediscovered in the 18th century, and excavated in the 20th century. They provide a snapshot of Roman life from 2000 years ago: perfectly preserved are wooden objects, food items, and the casts of hundreds of victims. Vesuvius is intensively monitored for potential signs of unrest that could signal the beginning of another eruption.