The pirate fighting US Navy 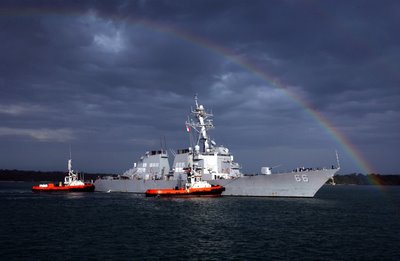 More on the US Navy effort (which is an international effort) against pirates off Somalia here from the The Virginian Pilot:

Just last week, the U.N. Security Council formally urged member nations to fight piracy and armed robbery off the coast of Somalia, a desperately poor country with no central government that has become a hub of pirate activity.

“If you’re a frigate, destroyer or cruiser deploying out of Norfolk to the Middle East, more often than not, this is what you’re doing,” a Navy official familiar with maritime security operations in the region said Monday.

“They’re looking for criminals that threaten regional security. They’re not looking for pirates,” the official added. “Sometimes that activity is the same, and sometimes it’s comple mentary.”

The International Chamber of Commerce, which tracks piracy incidents worldwide, reported 35 attacks off Somalia last year, up from just two in 2004. The organization now ranks Somalia as the world’s No. 2 piracy threat, behind only Indonesia.

Other authorities suggest the Somalian pirates are looking for money or goods they can convert to money rather than battles with organized navies. Saturday’s fight with the destroyer Gonzalez and cruiser Cape St. George erupted when U.S. sailors in a pair of inflatable boats tried to board and inspect the suspected pirate vessels.

“While right now piracy is 100 percent economic opportunism, certainly you wouldn’t want those with other motives – extremists – to get the idea that piracy is a great way to earn money for your terrorist operation,” Theresa Whelan, the deputy assistant secretary of defense for Africa, said in a phone interview in January.

The Navy began enhancing its anti-piracy training 18 months ago in response to increased activity, said Capt. John Andrews, director of fleet operations for the commander of the Norfolk-based 2nd Fleet.

While sailors across the fleet are prepared for hostile encounters, Andrews said those on destroyers and cruisers undergo the most comprehensive training.

Those sailors learn the legal rules of engagement and practice in simula tions and at sea, he said. The Navy tries to provide a new awareness of the possible dangers plying among the small dhows and commercial ships, he added.

“They’re all agile,” Andrews said, “so our training has to be thorough and agile.”

The Coast Guard also has several ships assigned to the task force and has stepped up efforts to train sailors in the navies of about 20 countries in the region.

Piracy is not the main concern, Tremper said, but part of an overall effort to make international waters safer for commercial traffic. “It’s all important,” he said.

Saturday’s engagement was at least the second time this year that Norfolk-based ships have tangled with Somalian pirates. In January, the destroyer Winston S. Churchill, helped intercept pirates who had taken over an Indian-

operated cargo ship off Africa’s east coast. Ten suspected pirates were turned over to Kenya for prosecution, and the 16-member Indian crew was rescued.

In the latest battle, a group of Somalis operating in a 40-foot dhow and a pair of smaller skiffs, proved no match for the destroyer Gonzalez and cruiser Cape St. George. The brief fight ended with one suspected pirate killed, five wounded, a dozen in custody and the capture of all three pirate boats.

There were no American casualties and machine gun fire from the attackers left only dimples in the hull of the Gonzalez .

In a phone interview on Monday, Cmdr. Robert Randall, the ship’s commanding officer, said the Gonzalez began tracking the suspicious three-boat tandem at 1:30 a.m. Saturday about 40 miles off the coast of Somalia.

The three small boats fit patterns that American and allied crews look for in searching for pirates “almost to a 'T,’ ” Randall said.

The Gonzalez, which killed its navigation lights to remain out of sight, followed the boats for three hours across 18 nautical miles in the darkness . Just before dawn, Randall ordered a pair of rubber inflatable boats, known as RIBs, manned with 18 sailors to board the suspected pirate vessels .

Randall said when the RIBs were within about 20 feet of the skiffs, they came under small-arms fire. The Americans shot back, then scrambled away as the Gonzalez and the Cape St. George hit the suspected pirates with machine gun fire.

Randall said the Gonzalez ’s boarding operations had been routine until the engagement.

Though sending RIBs to board other ships is routine, it i s often risky. The inflatable boats typically deliver a boarding party to a vessel, then leave. They return, a few minutes or sometimes hours later – to escort the boarding party back to the home ship. Weather, time of day and condition of the seas affect the mission.

The work occasionally can be deadly.

In April 2004, in the Persian Gulf, a 20-foot RIB operating from the coastal patrol ship Firebolt – based at Little Creek Naval Amphibious Base – attempted to stop a boat near an Iraqi oil rig. The boat exploded in an apparent suicide attack, killing two sailors and a Coast Guardsman.

This is surface ship work and the Surface Warfare community ought to be proud to be getting back to the roots of the US Navy.

A rainbow arches over the guided missile destroyer USS Gonzalez (DDG 66) as it pulls into the port of Mombasa, Kenya, for an overnight port call on July 6, 2005. The visit marks the first time a U.S. Navy ship has visited Mombasa since 1999. Gonzalez is currently deployed to the 5th Fleet area of responsibility and is participating in coalition maritime security operations as part of the Kearsarge Expeditionary Strike Group. DoD photo by Petty Officer 1st Class Wes Eplen, U.S. Navy. (Released)