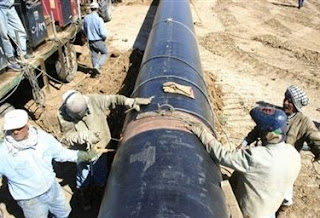 Al Qaeda attacks an oil pipeliine, apparently headless of its environmental impact, as set out here.:

An oil leak occurred at a valve on a pipeline near the Tigris River after it was attacked by insurgents near Bayji Sept. 18.

"This act demonstrates once again that al-Qaeda does not care about the Iraqi people or the environment. This is an environmentally dangerous situation and one that hurts the people, rather than helping them," said Lt. Col. Michael O. Donnelly, spokesman for Multinational Division-North.

The Northern Oil Company, or NOC, has immediately begun excavation and repairs to the line in order to prevent any further harm to the Tigris River and surrounding areas.
The NOC has stopped the flow of oil to the leaking valve and set the oil on fire purposely to mitigate water contamination.

This leaked oil could potentially affect river integrity, agricultural crops and live stock using water from the river and other uses of daily life in northern Iraq.

"Despite this latest act of terrorism by these insurgents, the Iraqi responders reacted quickly and their resolve remains strong.

I expect a strong attack on al Qaeda by Algore and his minions.