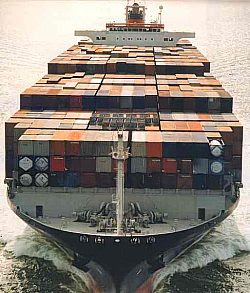 In 1997, according to this, theft of cargo at ports was a problem - a sizable problem:

Security of cargo is a major concern of port authorities. Thefts and smuggling of cargo, and stowaways, are occurrences that port authorities need to combat in order to ensure the quality of their services. The costs incurred by port users because
of these activities are very high, as shown by various recent analyses. For instance, in the United States, it is estimated that the annual cost of cargo theft and pilferage varies from US$ 3 to 10 billion a year.

While a $7 billion dollar range seems rather large to me, even the small number is a big number.

In a recent piece in Seapower magazine by David W. Munns here. Mr. Munns posits a scenario in which containers passing through Pakistan have had their contents stolen by thieves who un-weld the seams of the metal containers, take the products from inside the container and then re-weld the seams, apparently without breaking the seals on the boxes. Mr. Munns notes that the Department of Homeland Security has been seeking new ideas for container security and tis pushing a "Advanced Container Security Device (ACSD)" system.

One approach seems to be to change the standard metal shipping container to one made of strong composite material and embed sensors in the entire exterior which would provide detection capability of container stowaways, radiation and other information that may indicate problems.

The next generation of maritime cargo security from L-3 is designed to foil any conceivable attempt to hide stowaways, threat substances, and other contraband in sealed cargo containers.

ACSD will feature advanced state-of-the-art sensors that automatically detect live animals and people, as well as minute amounts of threat substances, that no other sealed cargo screening technology of its kind can reliably detect.

The revolutionary ACSD will continually screen the contents of sealed cargo containers for explosives and biological, chemical, and nuclear threat substances.
ACSD will track the entire sequence of a sealed cargo container’s journey, from the moment it arrives at the point of departure to release at its final destination. Designed to automatically identify tampering at any point in the container’s passage, ACSD will detect breaches wherever they occur: on the container’s sides, roof, or bottom.

As part of the CSI, DHS has also developed a technology research program called the Advanced Container Security Device. It is intended to meet the Department’s requirement for detecting and alerting shippers to compromised container security either from a terrorist or through cargo theft.

The technology will include sensors, locks and communications tracking devices that may become standard equipment on new containers, or retrofitted to containers already in the supply chain. The target price for this device is $50 per ocean voyage.

Officials are looking for a device that will monitor the integrity of a container on all six sides, tracking information about where the container has been, and sensor monitoring of the container contents. The device should also be able to store shipping data that could be fed to Customs and Border Protection’s cargo-data targeting system. This software would identify if the container has an intrusion and set off an alarm both locally and remotely - to the shipper or Customs.

And a patent to deal with the problem here.