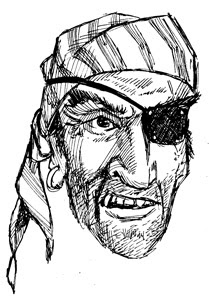 - 14.09.2007: 0330 UTC: 06:18N - 003:22E, Lagos anchorage, Nigeria. Deck crew onboard a tanker carrying out STS operations noticed two small boats in the vicinity. Suddenly one of the boats with three persons on board approached the ship. The OOW was informed, alarm raised and crew mustered. Robbers noticed the alert crew and aborted the attempt.

-14.09.2007: 0216 LT: 0616.5N - 003:21.3E, Lagos anchorage, Nigeria.
The deck watchman on an anchored tanker noticed a fast boat, with 3-4 robbers, approaching from astern. One robber was seen holding a pole with a hook attached to it. The OOW was informed, alarm raised, crew mustered and port control informed. On hearing the alarm, the robbers aborted the attempt.

-23.09.2007: Kutubdia anchorage, Chittagong, Bangladesh. Whilst carrying out anti piracy rounds, on a bulk carrier at anchor, ship's crew found forecastle store, door, lock broken and ships stores missing. Even though there were a number of shore personal working onboard the robbers went unnoticed.

-22.09.2007: 1950 LT: off Palembang, Indonesia. Several pirates hijacked a tanker, enroute to Cilacap from Palembang, with a cargo of Palm Olien. The master reported to TG. Buyut pilot station and they informed the tanker's managers. IMB piracy reporting centre has alerted the authorities to look out for the tanker.

-20.09.2007: 1715 LT: 110 NM West of Berbera, Somalia. Pirates hijacked a fishing vessel and anchored it near the village of Raas Shula. All crew including the four Somali security guards have been taken out from the ship.

-17.09.2007: 0250 UTC: 02:27.1N – 051:56.0E, Somalia. A bulk carrier underway sighted a vessel drifting on her port bow at a range of 12 nm. The boat suddenly increased speed and moved towards the ship. The ship took evasive action and increased speed to keep away from the suspicious craft. Due to ship’s higher speed, the suspicious boat moved away. An hour later, another suspicious boat was sighted on the stbd bow; the ship took evasive action to keep away from the boat. Due to ship’s higher speed, the boat was left behind. Ship continued her passage.

-11.09.2007: 2300 LT: vicinity of Ferguson Island, Milne Bay Province, Papua New Guinea. The captain of a workboat, transporting workers and cargo, jumped overboard when pirates boarded his vessel. The pirates robbed the crew and injured them with sharp objects. Later the crew received medical treatment at a shore hospital. A search party was sent to locate the captain but he could not be found.

-09.09.2007: 1145 LT: Posn 01:54.1N – 106:31.49E, 48 NM of Pulau Repong, South China Sea. Two speedboats, with an unknown number of few men and believed to be armed, were trailing a yacht underway. Suspicious of their intention, the yacht broadcast the incident via vhf radio. A passing by container ship relayed the message to Singapore port authorities. The Singapore port authorities relayed the message to MRCC Jakarta and broadcast a navigational warning via the Navtex and safety net system. The attempted attack was aborted.

-26.07.2007: 0730 LT: 40 NM west of Anambas islands, South China Sea.
A Chinese fishing vessel while underway was approached by a small rubber boat. Five pirates armed with guns opened fire at the fishing vessel and attempted to board. The fishing vessel increased speed and managed to escape. Bullets penetrated the bridge hull and damaged glass. No one was injured. The fishermen reported to authorities in china, Singapore and Malaysia.