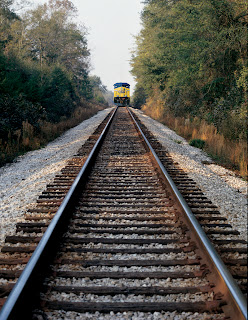 Fuel surcharges may have resulted in overcharges of $6.5 billion by U.S. railroads, it syas here:

Five major freight rail companies overcharged customers more than US$6.5 billion under the guise of fuel surcharges, according to a study commissioned by businesses that are accusing US railroads of anti-competitive behaviour.

"This is the greatest train robbery of the 21st century," said Jack Gerard, president and chief executive of the American Chemistry Council, which represents about 90 percent of the nation's chemical makers.

The council commissioned an economic analysis that found the railroads' fuel surcharges were excessive by more than $6.5 billion between 2005 and the first quarter of 2007. The study was based on regulatory filings and other estimates for Union Pacific Corp, Burlington Northern Santa Fe Corp, Norfolk Southern Corp, Kansas City Southern and CSX Corp.

Allegations in lawsuits should be approached with caution, as they tend to be extreme.
Posted by Mark Tempest at 9/14/2007 12:33:00 PM