The search is on, it is reported here:

American-led coalition forces operating on the coast of Somalia are looking for a vessel that is believed to be used by pirates to launch attacks on commercial ships passing through the area, the Nation has learnt.

"This is the vessel that we believe has been used by pirates off the Coast of Somalia to attack commercial vessels," she said when she accompanied the French ambassador, Ms Elisabeth Barbier, during a courtesy call on Mombasa Mayor Ahmed Mwidani.
***
Lt Bojeau said the coalition forces got the description of the ship from those that had been attacked.

"Others that have been trailed and feared an attack gave us the same description and as we speak, the coalition partners are searching for the vessels.

A dhow, previously seized by the U.S. Navy in the Indian Ocean is pictured nearby. 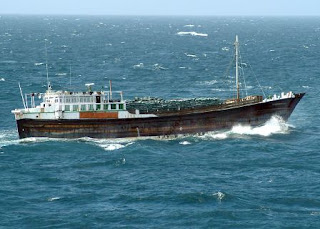