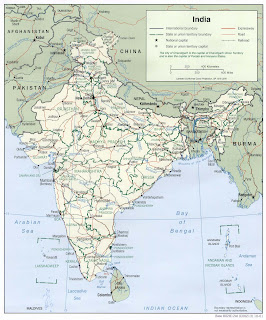 Some of the challenges India faces in the modern world, examined in an opinion piece, Military Rule and Democracy — How New Delhi should react to neighbourhood regimes:

Three countries, Bangladesh, Myanmar and Thailand, with whom we share land and maritime frontiers, play a crucial role in our Look-East policies. Thailand has periodically faced military coups with the latest takeover on September 20, 2006, when the then Prime Minister, Mr Thaksin Shinawatra, was overthrown.
***
There has been sustained co-operation between the security agencies and armed forces of India and Myanmar on trans-border insurgency. The Myanmar Government has also been co-operative on issues of border management. And Myanmar has shown a readiness to co-operate with India in developing hydroelectric projects, communications links and in oil and gas exploration.

India has already built a road connecting the border town of Moreh in Manipur to the railhead in Kalemyo, and plans are under way to commence a bus service from Moreh to Mandalay. Road and rail communications through Myanmar to Mae Sot, Thailand, and to Vietnam are also envisaged.

There are plans to link the landlocked north-eastern States to the sea through Myanmar. But recent western policies of seeking to impose sanctions on Myanmar have unfortunately driven that country even closer into the Chinese embrace.
***
The Chinese veto in the UN Security Council has had important economic and security implications for India. Yielding to Chinese pressures following its veto, the Myanmar Government decided that the gas produced in its offshore fields, in which the ONGC and GAIL have a 30 per cent stake, should be sold to China and not India.

New Delhi must take its share of blame for this development, because of its ill-advised proposal to build a pipeline through Bangladesh, which failed to take off, because of entirely predictable, but unacceptable Bangladeshi preconditions, which led to inordinate delay in our coming up with a sensible proposal for transportation of the gas.

In the meantime, China also utilised its political leverage to get exploration rights for gas and oil in the sensitive Rakhine (Arakan) Province of Myanmar, adjacent to its borders with India.

Moreover, an agreement has been reached for two major pipeline projects to carry gas and oil from Myanmar to the landlocked Chinese Province of Yunan. These projects will lead to the development of two strategically located ports in Myanmar — Sittwe and Kyaukpyu.

We are gong to see, for the first time, a Chinese presence close to our land borders east of the Irrawady River and major port facilities on our eastern doorstep. It will be China rather than India which will be exploring the estimated reserves of 13.4-47.3 trillion cubic feet of gas in the Bay of Bengal.

China’s strategy of chaining a “string of pearls” to surround India is now becoming clear. Shortly after the visit of former Chinese Prime Minister, Mr Zhu Rongji, to Islamabad in 2001 Gen Musharraf told a Pakistani journalist at the Pakistan Institute of International Affairs that in the event of a conflict, or escalating tensions with India, Pakistan would not hesitate to provide naval facilities to China at the Gwadar port, located at the mouth of the Persian Gulf in Baluchistan, being built with Chinese assistance. (China has since agreed to provide Pakistan four naval frigates).

China has also sought to develop port facilities in Hambantota in Sri Lanka and in the Maldives and Seychelles. A Chinese Admiral remarked sarcastically over a decade ago: “The Indian Ocean is not India’s Ocean”. China appears determined to build the requisite infrastructure to develop its naval presence surrounding India, to reinforce its sustained diplomacy to pre-empt Indian efforts to gain access to new sources of oil and gas.

China’s skilful diplomacy in Myanmar, which has resulted in the installation of radars in the Cocos Islands off the Andaman Coast, capable of monitoring Indian fleet movements and missile tests and its determination to develop Sittwe and Kyaukpyu are all a part of this strategy of containment of India.

Complementing this strategy is a skillfully crafted use of its “soft power” to use “Trojan Horses” within India to advocate its cause and gloss over issues like China’s claims to Arunachal Pradesh, its nuclear and missile proliferation to Pakistan and its efforts to frustrate Indian diplomacy in Nepal by joining Pakistan to provide weapons to an embattled and unpopular monarch in the kingdom.