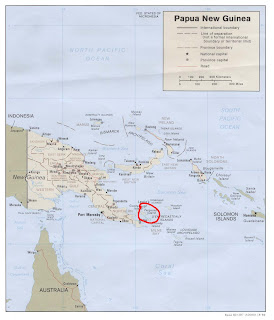 AUTHORITIES in Milne Bay province are concerned that pirates were roaming the waters of the coastal province attacking people and stealing their goods.
This followed an attack on a boat early this week, whose skipper is still missing.
The captain is believed to have jmped overboard while the crew was hospitalised after pirates boarded their boat and robbed them near Fergusson Island in Milne Bay province on Tuesday night.
Milne Bay provincial disaster officer Eric Balaria said the crew of mv Nosy sustained injuries from sharp objects and were receiving medical treatment at the Alotau hospital.
Mr Balaria said the captain jumped overboard near Valeta point at about 11pm and a search party put out on Wednesday failed to locate him.
Mr Balaria said the 28ft work boat, owned by Brian Giuda, with passengers and cargoes was headed for Alotau after leaving Mabawoia station in the Esa’ala district.
He said the boat was intercepted by pirates who were using a speed boat, about 5km from the station.
A confrontation led to the crew being injured and the captain jumping into the sea.
*** “This is the third piracy incident this year,” he said.