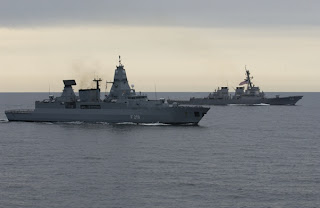 NATO warships are scouting the coast of Africa on a mission that could lay the groundwork for action by the alliance against pirates off Somalia.

The six ships are taking part in manoeuvres with the South African Navy as part of a circumnavigation of the continent, the first by a Nato force.

Admiral James Burnell-Nugent, commander of the Nato flotilla, said yesterday that the Africa mission was intended to get the alliance’s maritime forces more involved outside their traditional arena but should not be seen as “expansion”.

He said: “It’s got nothing to do with oil or the war on terror.”

The intention was to improve Nato’s ability to protect trade routes and to increase its knowledge of “the good guys and the bad guys” in the region.

Burnell-Nugent said the “bad guys” included human traffickers and pirates operating off the Horn of Africa. 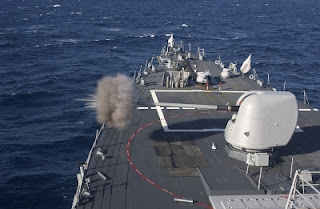 Asked if the mission were a prelude to direct Nato action against the pirates, who have raided ships carrying food aid to the region, he said: “That depends on Nato’s resolve ... but if you don’t understand what’s going on, you haven’t got the knowledge from which these issues can be addressed.”

Warning shot across the bow - fired! More on Standing NATO Maritime Group One here. Ship images are from that site, and show SNMG1 in training, not on its current mission.

Speaking of "human trafficking," see here for news on the annual build up of people waiting to sail away from Africa to seek a better life elsewhere:

Some 3,000 Ethiopians have gathered in the dusty northern Somalia port of Bossaso, joining Somalis preparing to make the risky trip to Yemen across the Gulf of Aden during the annual sailing season.

The bad weather that kept smugglers' boats ashore between June and August is coming to an end and a fresh wave of people smuggling has already started. Those making the journey risk everything; at least 385 people died during the crossing through the first five months of this year.
***
A Somali humanitarian worker in Bossaso explained that many of those considering making the trip were persuaded by middlemen to head to Bossaso, where the smugglers take over. "Smugglers are businessmen who compete with one another," he explained. "They are so eager to attract new customers that some have even disseminated videotapes in Bossaso to advertise life in Saudi Arabia in the teashops where Ethiopians gather."

The aid worker said he tried in vain to tell people that the promises were hollow and to warn them about the deadly risks they faced. "Once the migrant is stranded with 300 others on a small boat and beaten by a crew of four or five men high on drugs and holding guns, he discovers the true face of the smugglers, but it is too late," he said. "For smugglers, migrants are just merchandise." 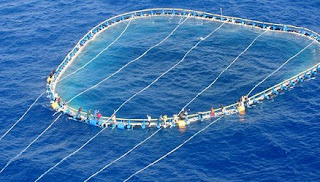 The local authorities in Bossaso, which is surrounded by shantytowns built by displaced Somalis, cannot cope alone with the arrival of so many destitute people. Many of the would-be voyagers, having been robbed of their money, resort to begging in the streets.

An earlier post on some of the victims of the smugglers, including what seems to be a useless "UN Protocol" (what, another one?)here. Photo is of 27 African migrants, whose boat sank during their attempt to leave Africa, as reported here:

For three days and three nights, these African migrants clung desperately to life. Their means of survival is a tuna net, being towed across the Mediterranean by a Maltese tug that refused to take them on board after their frail boat sank.

Malta and Libya, where they had embarked on their perilous journey, washed their hands of them. Eventually, they were rescued by the Italian navy.

The astonishing picture shows them hanging on to the buoys that support the narrow runway that runs around the top of the net. They had had practically nothing to eat or drink.