Get the Pueblo back? 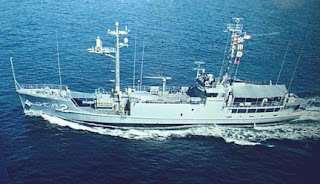 An "expert" says there might be a chance to have USS Pueblo returned from North Korea...here:

"The political ground has changed considerably in the past two years," McKinney said by telephone Friday. "Right now, the North Koreans have said they are willing to reveal their entire nuclear program, which would take us nearly back to our diplomatic relationship in 2002. Also, the U.S. has held high-level, bilateral talks with North Korea this year. This would be a good time to put the return of the USS Pueblo back on the agenda."

The Pueblo was a Navy intelligence ship, operated by the National Security Agency, that was eavesdropping on North Korean communications offshore in January 1968. Attacked by North Korean patrol boats, the Pueblo was seized and its 82-man crew held in captivity and tortured for 11 months. One crewman, Duane Hodges, was killed in the seizure.

North Korea has held the ship as a war trophy and propaganda tool ever since. Colorado lawmakers have introduced a series of resolutions over the years, demanding the return of the ship, which is still commissioned by the Navy.