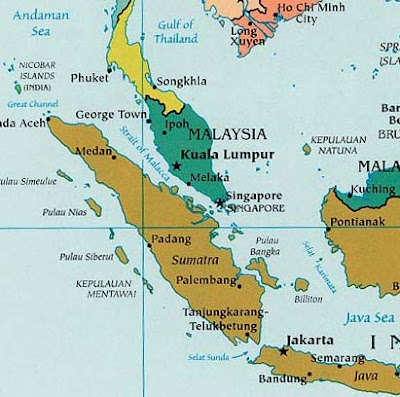 Malaysia, Indonesia and Singapore have come up with a Co-operative Mechanism to ensure navigational safety and environmental protection in the Straits of Malacca and Singapore.

This was decided at a meeting in Singapore attended by participants from the three countries.

Singapore's Deputy Prime Minister S Jayakumar said the Mechanism needs to provide a transparent and inclusive platform for dialogue with all interested stakeholders.

About a third of global trade and half of the world's oil flows through the Straits of Malacca and Singapore, visibly one of the world's busiest sea lanes.

Transport Minister Raymond Lim said: "Where shipping is concerned, we cannot over emphasise the importance of international co-operation. The littoral states, user states, international and industry organisations all have a part to play in the Straits of Malacca and Singapore.

"Our common interest lies in ensuring that the Straits remain safe, open and secure for shipping."
***
Six projects have so far been identified, among them the removal of wrecks in the Straits, co-operation in capacity building to deal with accidents involving hazardous and noxious substances, and replacing aids to navigation along the Sumatran coastal areas, which were destroyed as a result of the tsunami.

Participation of user states and stakeholders in this mechanism is voluntary.

Prof Jayakumar said: "Japan has made regular and significant contributions through the Malacca Straits Council, which is supported by the Japanese Government and the Japanese maritime community. They have contributed generously over the past 35 years, having expended nearly US$130 million on improving navigational safety in the Straits. They also helped to set up the Revolving Fund in 1981 to deal with oil pollution in the Straits.

"However, we now have a much broader range of stakeholders with different interests, concerns, expertise and capabilities. The Co-operative Mechanism is therefore necessary to provide a transparent, open and inclusive platform for dialogue with all interested stakeholders.

"Through its Co-operation Forum, littoral states could spell out their needs and interests. On their part, user states and other stakeholders can consider areas where they can lend support, provide capacity building and functional co-operation through the projects, or contribute monetarily to the Aids to Navigation Fund, all on a voluntary basis. The key is to build on the areas of convergences on which we can develop mutually beneficial outcomes."

Secretary-General of International Maritime Organisation (IMO), Efthimios Mitropoulos, said: "The time has now come for the IMO to act as a liaison with stakeholders who may, through voluntary contributions, assist in the implementation of the identified projects."

Countries like the United States, Japan and China are already taking part in some joint projects and the Singapore meeting hopes to get more users to play their part in making the Straits safer and more secure.

UPDATE: More help for the Strait of Malacca---this time from China-- as set out here:

China agreed to sponsor the whole cost of a US$2.6 million project to replace several lighthouses and beacons along the eastern coast of Sumatra that had been damaged by the 2004 Indian Ocean tsunami disaster, officials said. The meeting was also attended by representatives from the International Maritime Organization.

China is also taking part in a project to tackle pollution by hazardous chemicals, together with the United States and Australia. It has also promised to send a team of experts for a project on installing a system for measuring winds, currents and tides.

However, Japan remains a dominant player with the Nippon Foundation, a Japanese philantropic organization, announcing that it will pay for up to a third of an estimated US$28.2 million fund to replace and maintain beacons and lighthouses along the Malacca Strait for the first five years of the project.