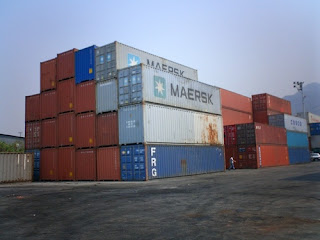 Found as 100% Screening and Other Cargo Insecurities:

Those who operate ships recognize the dangers of shipping un-inspected cargo, though not as intensely as some prefer. The growing concern over the likelihood of a catastrophic act of maritime and other transport-system terrorism has led to measures for increasing physical security.

Among such measures, one could cite the strict enforcement of the International Code for Security of Ships and of Port Facilities (ISPS) Code, which was adopted in December 2002 and went into effect globally in July 2004. The code, which was introduced by the International Maritime Organization in the aftermath of the September 11, 2001, terrorist attacks in the United States, attempts toward a similar strict enforcement of the Container Security Initiative.

Beyond ships and ports, the danger of importing nuclear bombs and other weapons (not to mention terrorists, themselves) in containers may have increased with the U.S. government having opened the borders and highways to Mexican truckers working for 100 companies, according to a 20-plus-year truck driver at FamilySecurityMatters.com.