The almost unnoticed Panamax 2007 Exercise wraps up, as noted here:

The exercise was designed to improve terrorist countermeasures to protect the vital waterway. Simulated ground forces participated at the Soto Cano air base in Honduras.

According to the US Southern Command in Miami PANAMAX 2007 "focused on ensuring the security of the Panama Canal from both the Caribbean and Pacific approaches." Commander of the Norfolk-based Second Fleet Vice Admiral Evan Chanik led the exercise.

Deputy commanding general of US Army South, Brigadier General Manuel Ortiz, said in a statement: "This year's Panamax is a truly amazing exercise. This is the largest exercise in the hemisphere." 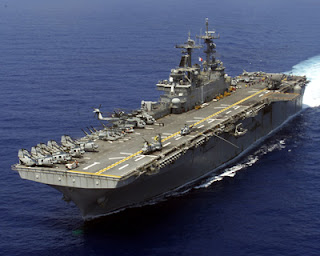 While Panamax has been held annually since 2003, for the first time France sent a vessel to participate, the frigate FS Ventose. Peru contributed the frigate BAP Bolognesi and missile corvette BAP Sanchez Carrion, while Colombia dispatched the ARC Antioquia frigate and ARC Buenaventura supply ship. The Royal Netherlands Navy, home-ported in the Antilles and Curacao, dispatched the HNLMS Van Nes. Chile, one of the three original participants in the exercises since 2003, contributed the frigate CNS Almirante Blanco Encalada and a P-3 ocean surveillance aircraft. Canada sent HMCS Regina along with soldiers to Honduras to participate in simulated security and humanitarian assistance scenarios. The war games emphasized visit, board, search and seizure (VBSS) of targeted vessels, maritime interdiction and flight operations.

The continued importance of the Panama Canal is noted:

Ninety-three years after its construction, the Panama Canal remains the Western Hemisphere's most vital waterway, shaving nearly 8,000 miles off ships' Pacific-Atlantic transit, allowing them to avoid the storm-laden Straits of Magellan and the Drake Passage off Argentina's southern coast. The Panama Canal represents the culmination of a centuries-old dream, having first been suggested in 1523 by Holy Roman Emperor Charles V.

More than 14,000 ships annually, or about 40 per day, transit the canal. According to Panama Canal Administration head Alberto Aleman, tonnage transiting the canal has risen steadily, increasing from 230 million tonnes in 2000 to nearly 300 million in 2006.

For the past eight years, the Panama Canal has been completely under Panamanian sovereignty. Ironically, during the 1970s the greatest threats to the canal's security came from the Panamanian government. During the 1960s and 1970s, Panamanians demonstrated in protests over US sovereignty, while then-Panamanian president Omar Torrijos, stymied during the initial negotiations, threatened to blow up the canal if the US did not leave. On 7 September 1977, Torrijos and then-US president Jimmy Carter signed treaties beginning the process of a 20-year phase-out of US military forces and the transfer of all US the military bases and the Panama Canal to Panama by 31 December 1999.

Since Panama received control over the canal, income generated by the waterway has increased from US$769 million in 2000 to an estimated US$1.765 billion expected for the 2007 fiscal year, which ends on 30 September.

The increased tariff revenues will come in handy as on 3 September Panama began the waterway's biggest expansion since it opened in 1914. The project will add a new set of locks to the existing two, which will allow two-way traffic through the waterway at an estimated cost of US$5.25 billion, with completion by 2015.