The Goose Creek Two: Not quite "babes in the woods?" 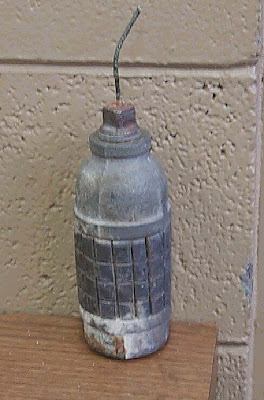 Fred Fry introduced me to the "Goose Creek Two" as set out in this post from early August. Fred's post has maps and more on the unlikelihood of this being a "whoops" adventure of two college kids.

Now, with a hat tip to The Counterterrorism Blog, we learn more about these not so innocent sounding University of South Florida students at Indicted USF Student has Terror Past in Egypt:

Two Egyptian students enrolled at the University of South Florida have been indicted for carrying explosive materials across states lines. One of the defendants also is charged with teaching the other how to use them for violent reasons.

Ahmed Abdellatif Sherif Mohamed, 24, an engineering graduate student and teaching assistant at the Tampa-based university, faces terrorism charges for teaching and demonstrating how to use the explosives.

According to officials familiar with the case, Mohamed has been arrested previously in Egypt on terrorism-related charges. He is said to have produced an Internet video showing how to build a remote-controlled car bomb.

The men reportedly made police officer suspicious during a traffic stop when one of them tried to quickly put away a laptop computer. The computer was seized.

Stratfor coverage of the arrest here:

The deputy, however, concluded that the trunk contained more than a few fireworks, and called for backup. The items discovered inside the vehicle include potassium nitrate, sugar, gasoline and PVC pipe. Also found were so-called "hobby rocket igniters" and "hobby fuse," materials that can be used to make both model rockets and pipe bombs. A bomb squad summoned to the scene reportedly performed an operation to break apart, or "disrupt," one section of PVC pipe, which authorities said contained a "suspicious substance."
***
Potassium nitrate (or saltpeter) is the oxidizer used in the manufacture of black powder. When potassium nitrate is mixed with sugar and confined -- as in a PVC or metal pipe, thermos bottle or tin can, for instance -- it will function as a low explosive. Indeed, improvised explosive devices (IEDs) manufactured from potassium nitrate are common in many parts of the world. Hobby fuses and rocket igniters could be used to activate such a device.

Potassium nitrate and sugar, however, also can be used as a rocket propellant -- so it is possible the two men intended to make and launch a homemade rocket. The major difference between a bomb and a rocket is the configuration of the PVC pipe. If the pipe was sealed only at one end it might have been intended for use as a rocket (or it was an incomplete IED.) If the PVC pipe was sealed at both ends, it clearly was intended to be an IED. Under the law, however, either construction could be considered a pipe bomb, depending on the details.

Another potentially incriminating item in this case is the gasoline can found in the trunk of the car. Gasoline, which has no application in model rocketry, can be combined with the other materials seized to create an explosive-actuated incendiary device -- which can be more destructive than a pipe bomb alone. Of course, it is possible the men were simply transporting a can of gasoline for innocuous reasons, though it is dangerous to transport gasoline in close proximity to incendiary mixtures, especially in the heat of the South.

Image and information on pipe bomb and other improvised explosive devices from here - an Oregon State Police website.
Posted by Mark Tempest at 9/01/2007 09:35:00 AM