A warning about a seaborne threat "that could dwarf 9/11"

A familiar threat reappears (see here and here in an editorial in Investors Business Daily here:

The extent of the threat posed by Iran getting a nuclear warhead to place atop its Shahab missiles is not limited to Israel or targets in the Middle East and Europe. A new study by the Sage Policy Group of Baltimore suggests that an armed Iran would put the U.S. itself in the cross hairs of nuclear devastation.

The threat is called electromagnetic pulse, and it is the one way we could lose the war on terror. The study, titled "Initial Assessment of Electromagnetic Pulse Impact Upon Baltimore-Washington-Richmond Region," says a Scud-type missile launched from a small ship 200 miles off our coast would cause $771 billion in damage, equal to 7% of our annual gross domestic product.

This threat to our national security was the subject of study by the Commission to Assess the Threat to the United States from Electromagnetic Pulse Attack, established by unanimous consent of the House and Senate. Released on the same day in 2005 as the 9/11 Commission report, it was virtually ignored.

Rep. Roscoe Bartlett, who wrote a foreword to the Sage Group Study, says, "EMP is a low-risk, but asymmetrical form of devastating attack that would dwarf the scale of damage from the 9/11 terrorist attack."

In his foreword, Bartlett said: "The EMP Commission found that a short- or medium-range missile, like a Scud or Iran's Shahab-3, launched off a freighter, could make an EMP attack on the United States. Iran has practiced such a launch-mode, firing a Scud missile off a vessel in the Caspian Sea."

Dr. Peter Vincent Pry, a senior staffer with the EMP Commission, has testified before a Senate subcommittee on terrorism, technology and homeland security that Iran has successfully test-fired a missile from a ship in the Caspian Sea and that Iranian tests of their Shahab-3 missile have involved several high-altitude explosions.

As Pry noted: "The Western press has described these test-flights as failures, because the missiles did not complete their ballistic trajectories. Iran has officially described all of the same tests as successful. The flight tests would be successful, if Iran were practicing an EMP attack."

Naturally, the Democrats in Congress have cut the budget for a defensive system that might help against such a threat:

In the face of this threat, our Democratic Congress has drastically slashed President Bush's fiscal 2008 budget request for the Air Force's airborne laser program. 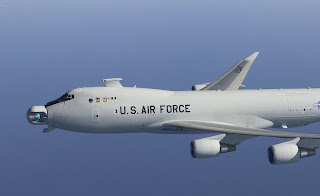 The ABL uses a modified 747-400F equipped with a system that locates and track ballistic missiles in the boost phase of their flight, when they're most vulnerable, then accurately points and fires a high-energy laser to destroy them.

ABL aircraft patrolling our coasts are needed to defend against the EMP threat, and the program should be fully funded by a Democratic Congress that says Bush hasn't done enough about homeland security.

See also here. A reduction in funding may delay the ABL program- but it is part of a missile defense system that many Democratic congresspeople are on record as not supporting.

UPDATE: It may be that the funding for the ABL will not be cut -- see here:

Senators are planning to cut budgets for the space interceptor portion of the controversial US missile defence programme, according to reports. However, it appears that a complementary scheme to blast enemy ICBMs shortly after takeoff using a giant laser cannon mounted in a jumbo jet will be fully funded.

According to a report by Aviation Week & Space Technology, Senate subcommittee members who have been marking up the US defence spending package gave some hints earlier in the week.
The ABL Boeing 747. Photo: USAF

It seems that the ground-based mid-course defence layer of the proposed American missile shield will not get the money requested by the Bush administration. In particular, the draft Senate bill will cut appropriations for planned interceptor and radar sites in Eastern Europe.
***
What hasn't yet been shown is the feasibility of making a missile explode by lighting it up with a raygun, let alone a raygun that has to fit in a plane. But Boeing, leaders of the Airborne Laser (ABL) programme, have their modified jumbo jet all ready to go. They also claim successful ground tests of the necessary laser machinery. The firm recently swore blind that if they got the full budget request, they'd blast a missile using ABL in 2009. (They said 2005 last time, in 2002.)

The idea of ABL is to produce a fleet of raygun jumbos which might patrol near, say, North Korea (just to pluck a name from the air). As the ICBMs lifted up through the atmosphere, the ABL planes would disintegrate them with high-powered lasers from up to 400km away. Being mostly pressurised tanks full of explosive rocket fuel, ICBM boosters are fairly prone to blowing up if even you leave them alone; so this is a bit more feasible than it sounds. That doesn't make an ABL simple to build, though.

It now appears that the Senators plan to call Boeing's bluff; AW&ST report that the subcommittee scribble on the draft bill approves the full ABL request of $549m in the next fiscal year. The aerospace colossus – which is partnered with most of the US arms industry on ABL – may soon have to make good on its promise, if the subcommittee plans are approved.