Euros do waterways? Well, they talk about it... 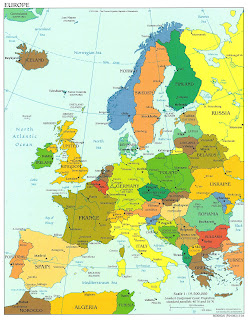 Reported as Conference on maritime and waterways co-operation by OSCE. The Organization for Security and Co-operation in Europe takes on waterways issues:

An international OSCE conference on the role of maritime and inland waterways co-operation in enhancing security and protecting the environment ended in Helsinki on 11 September.

It brought together more than 150 participants, representing governments, international and non-governmental organizations, academia and business. They reviewed existing initiatives and activities in these areas and identified best practices as well as gaps and niches for future OSCE involvement.

"The OSCE can be instrumental in stimulating synergies between various regional co-operation mechanisms as well as between different actors including government agencies, the private sector and NGOs," said OSCE Secretary General Marc Perrin de Brichambaut.

The OSCE says it has a role in fighting "human trafficking" as set out here:

The OSCE plays a key role in the fight against human trafficking, Silvia Escobar, Spanish Ambassador at Large for Human Rights, said at a meeting on how to best support trafficking victims that concluded in Vienna today.

Ambassador Escobar, representing the Spanish OSCE Chairmanship, said she hoped a decision or a declaration on human trafficking could be adopted at the OSCE Ministerial Council, to be held in November in Madrid.

"We need permanent awareness campaigns, training courses, exchange and promotion of good practices, international laws and decisions to fight the corruption that goes along human trafficking," Ambassador Escobar said. "Our fight against human trafficking requires the same determination as does our efforts to combat other security threats."

Eva Biaudet, the OSCE Special Representative and Co-ordinator for Combating Human Trafficking, encouraged the 56 OSCE participating States to address the gaps that still persist in policies and practices.

"We need in-depth research that will enable us to assess the results of national and international anti-trafficking policies and responses," she said.

Participants in the two-day conference presented studies on the effectiveness of anti-trafficking policies and programmes, changing trends and patterns of trafficking, profiling of victims and traffickers' operating methods. Recently approved anti-trafficking laws, their links to immigration laws and EU strategies also were discussed.

One can hope the two efforts will be connected and the issue of human cargo being set adrift at sea will be tackled.