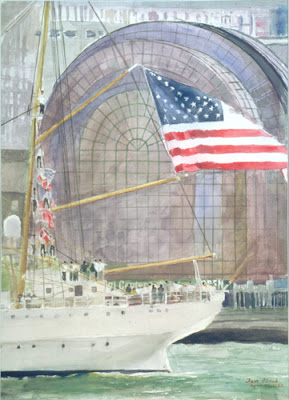 A report by the U.S. Government Accountability Office, the investigative arm of Congress, says the Department of Homeland Security has failed to meet half its performance expectations since it was established in 2003....
"There were 171 different performance expectations of which we judged that 78 were generally achieved, 83 generally not achieved, and 10 that we did not assess."

The GAO says the Homeland Security Department made the least progress toward some of the fundamental goals set after the 2001 attacks, including improving emergency preparedness and eliminating bureaucratic and technical barriers to information sharing.

The GAO finds moderate progress made in such areas as immigration enforcement, transportation security, and securing critical infrastructure, including bridges and power plants.

The report says the only area where significant progress has been achieved has been in maritime security.

Some of the reasons for the improvement is the U.S. Coast Guard, as set out here:

· Boarded and inspected ships to search for threats and confirm the identity of those aboard.

Escorted cruise ships in and out of port and enforced 100-yard “no sail” Security Zones around them.

· Established a new, centralized National Vessel Movement Center and required foreign ships to provide a 96-hour advance notice of arrival plus more information about the ship, cargo, and all people on board – information that is shared with other intelligence and law enforcement agencies to detect threats.

· Established and enforced Naval Protection Zones around all naval vessels. Penalties include forfeiture of vessel, 6 years in prison and $250,000 fine.

· Used the pollution and hazardous materials expertise of the of Coast Guard’s National Strike (NSF) to prepare for and respond to bio terrorism response and weapons of mass destruction.

· Worked to “push our borders out” to detect threats before they reach our shores. Strengthened our relationships with federal, state, local and international agencies to share information and coordinate security operation.

· Partnered with mariners and boaters to help keep waterways safe and secure by asking them to be more careful about their own activities on the water, and to be more aware of and report unusual and suspicious activity.

· Maintained the highest level of alert and continued the largest port security effort since WWII.

· Launched the first phase of a long-term $17-billion program to build the next generation of Coast Guard ships and aircraft, communications and logistics systems and began some immediate system upgrades that will enable the Coast Guard to perform their essential maritime safety and security missions. Years in the planning and known as the “Deepwater” program because of its focus on larger ships and planes capable of operating far offshore, the contract will strengthen the front line of the Coast Guard's layered homeland security strategy.

· The coastline is our longest border and we will remain vigilant. (95,000-mile coast includes Great Lakes and inland waterways.)

Coast Guard remains at a heightened state of alert at over 361 major ports.

Coast Guard Investigative Service Special Agents continue to serve as Air Marshals in support of the DOT and FAA. (they are the only military personnel allowed to participate in Air Marshal program).

Over 2,700 Reservists were recalled to active duty· Port Security Units remain on duty in Guantanamo Bay Cuba providing security to JTF 160 at the U.S. Naval Base.

95% of our annual commerce comes by ships through our ports.

The Coast Guard training Barque Eagle sails up the Hudson River past the area of the World Trade Center tragedy, saluting as it passes during Fleet Week activities.