On September 2, 1944. off the coast of a contested shore, a young pilot, fighting a damaged aircraft- after having completed a bombing run- bails out of his doomed plane, over the open ocean. Four hours later, after being provided air cover, he is recovered by a rescue submarine. A tale of the sea, of World War II...except that the pilot went on to become President of the United State, as did his son...the submarine that rescued Lieutenant Junior Grade George Herbert Walker Bush was USS Finback (SS-230) which continued to recover downed pilots ... and compiled quite a war record:

Finback reached Pearl Harbor from New London 29 May 1942, and 2 days later, with the Japanese Fleet on the move, was ordered out to patrol during the great victory in the Battle of Midway. She returned to Pearl Harbor 9 June to prepare for her first full war patrol, on which she sailed for the Aleutians 25 June. Finback first contacted the enemy on 5 July, when she attacked two destroyers, and received her baptism of fire in a heavy depth charge attack. Two special missions highlighted this first war patrol, a reconnaissance of Vega Bay, Kiska, 11 July, and a surveying operations at Tanaga Bay, Tanaga, 11 August. The submarine ended her patrol at Dutch Harbor 12 August, and returned to Pearl Harbor 23 August to refit.

Departing Pearl Harbor 23 September 1942, Finback made her second war patrol off Taiwan. On 14 October, she sighted a convoy of four merchantmen, guarded by a patrol vessel. The submarine launched two torpedoes at each of the two largest targets, sinking one, then went deep for the inevitable depth charging. When she surfaced, she found two destroyers in the area, preventing a further attack. With tubes reloaded she headed for the China coast. Four days later, 18 October, she inflicted heavy damage on a large freighter, and on 20 October, Finback sent another large freighter to the bottom. Rounding out this highly successful patrol with a surface gunfire engagement with an ocean-going sampan, which she sank on 3 November, Finback returned to Pearl Harbor 20 November.

During her third war patrol, between 16 December 1942 and 6 February 1943, Finback served for some time as escort for a carrier task force, forbidden to reveal herself by making attacks during a part of the patrol. On 17 January, she engaged a patrol boat in a surface gun duel, leaving the enemy craft abandoned and sinking. After refitting at Midway, Finback made her fourth war patrol between 27 February and 13 April, scouting shipping lanes between Rabaul and the Japanese home islands. On 21 March, she damaged a large cargo ship, and from 24 to 26 March made an exasperatingly difficult chase of a convoy. At last in position to attack, she fired three torpedoes at each of two ships, and was immediately fired upon, then forced deep by an uncomfortably efficient depth-charging. Almost out of fuel, Finback was forced to break off the contact, and shaped course for Wake Island and Midway. On 5 April, passing a reef south of Japanese-held Wake, Finback sighted a merchantman beached and well down by the stern. Through radical maneuvers and brilliant timing, the submarine was able to elude both a patrol boat and a searching aircraft and put a torpedo in the beached ship. This was the final blow in sinking this 10,672-ton ship previously damaged by two of Finback's sister submarines.

Finback refitted at Pearl Harbor from 13 April 1943 to 12 May for her fifth war patrol, through most of which she patrolled off Taiwan, and along the shipping lanes from the Japanese home islands to the Marshalls. On 27 May, she sank a cargo ship, and sent another to the bottom on 7 June. Yet another of Japan's dwindling merchant fleet was sunk by Finback 4 days later. After refitting at Fremantle, Australia, 26 June to 18 July, the submarine sailed for her sixth war patrol along the Java coast. Her first contact was made 30 July, and although the freighter defended herself with gunfire, she was sunk, as was a larger cargo ship on 3 August. On 10 August, she outwitted both a surface escort and a patrol plane to inflict damage on another merchantman. Finback encountered two small mineplanters, a tug, and an inter-island steamer on 19 August, and engaged all but the tug with surface gunfire, leaving three badly damaged ships behind when her dwindling supply of ammunition forced her to break off the action.

After a major overhaul at Pearl Harbor between 12 September 1943 and 15 December, Finback sailed for the South China Sea on her seventh war patrol, characterized by heavy weather, few contacts, and continual sighting of patrol planes. She sank a large tanker in a surface attack on New Year's Day 1944, sent a fishing trawler to the bottom after a surface gunfire action on 30 January, and left another badly damaged after a similar action the next day.

The submarine refitted at Pearl Harbor once more between 11 February 1944 and 6 March, then sailed for her eighth war patrol, off Turk in the Caroline Islands. Prevented from launching attacks through most of this patrol because of her assignment as lifeguard for carrier air strikes on targets in the Carolines, Finback contacted a six-ship convoy on 12 April, noting three escorts. She attacked four of the ships before heavy counter-attack sent her deep. On 16 April, while making a reconnaissance of Oroluk Atoll, she fired on a partially submerged steamer and a lookout tower on the atoll. Three days later, she sank one of a group of sampans, then sailed for refit at Pearl Harbor from 1 May to 30 May.

During her ninth war patrol, off the Palaus and west of the Marianas, Finback again had as her primary mission lifeguard duty during plane strikes covering the opening of the Marianas operation. She returned to Majuro 21 July 1944 for refit, then sailed 16 August on her tenth war patrol, assigned to lifeguard duty in the Bonins. Guided by friendly aircraft, she rescued a total of five downed pilots, one very close inshore off Iwo Jima. On 10 and 11 September she tracked a convoy, and although twice her attacks were broken off by an alert escort, she sank two small freighters. On her eleventh war patrol, for which she prepared at Pearl Harbor from 4 October to 1 November, Finback was again detailed to lifeguard duty in the Bonins. She sank a freighter on 16 December, and returned to Midway 24 December.

The submarine's twelfth war patrol, made between 20 January 1945 and 25 March in the East China Sea, was frustrated by lack of worthwhile targets, and Finback returned to Pearl Harbor for thorough overhaul. Still at Pearl Harbor at the close of the war, she sailed for New London 29 August 1945.

Homeported at New London for the remaining 5 years of her active career, Finback was engaged in training student submariners. Twice, in 1947 and in 1948, she sailed to the Caribbean to take part in 2d Fleet exercises. She was decommissioned and placed in reserve at New London 21 April 1950.

All save the third, ninth, and twelfth of Finback's 12 war patrols were designated "Successful." She received 13 battle stars for World War II service, and is credited with having sunk 59,383 tons of enemy shipping.

She returned to Majuro 21 July 1944 for refit, then sailed 16 August on her tenth war patrol, assigned to lifeguard duty in the Bonins. Guided by friendly aircraft, she rescued a total of five downed pilots, one very close inshore off Iwo Jima.

Five pilots rescued, mission continued. And those pilots went on to other missions. To raise families and start businesses and contribute to their country. As did the crew of Finback... and some were not so lucky...

And a memory of the bravery of the submarine crews here:

Quarters were so tight that the five rescued airmen had to "hotbunk" - sleep in bunks vacated by crew members on duty and leave when the crewmen came back to turn in. The Finback primary role was combat. While Bush was on board, it sunk two enemy ships and was depth bombed. "That experience was far scarier than an airplane bombing run," Bush remembers. "At least in the plane, you controlled your destiny to some extent...but there, under the water, all you could do was hope like hell that an enemy wouldn't put an explosive on top if you."

Wars are won by men who are willing to face such dangers...

Offer up a salute to the Finback, her crew and the other men who served on boats like her. 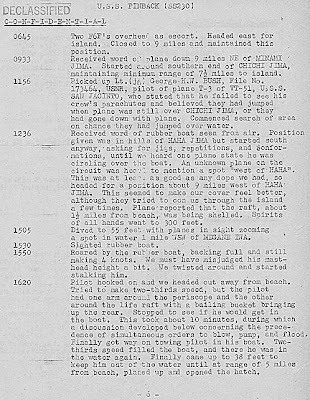