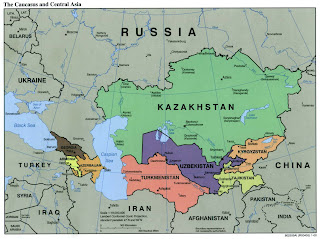 A former Indian diplomat looks at the meaning of a U.S. sponsored bridge between Afghanistan and Tajikistan and finds it part of the "Great Game" here:

What is the significance of a 670-meter bridge? Previously, a sporadic ferry service connected the Tajik town of Nizhny Pyanj with the Afghan town of Shir Khan Bandar. The torrential river currents didn't allow the ferry to operate for months at a stretch when the ice and snow melted in the Pamirs and flooded the tributaries. But the new bridge can easily handle as many as 1,000 trucks per day.

Strictly speaking, US Secretary of Commerce Carlos Gutierrez didn't have to come all the way to witness the commissioning of the US$37 million project. But the US administration evidently regarded this as a showcase project. Gutierrez said the bridge would become "the widest connection between Afghanistan and the rest of the world". That was an interesting enough diplomatic statement - relating Afghanistan to its northern neighbors.

But more important, he went on to describe the bridge as a "physical and symbolic link between Central Asia and South Asia". Afghan President Hamid Karzai, who was present, took a step further ahead and called it a link that "unites Central Asia with Southern and East Asia". China enters the podium.
***
It is extremely rare that the geopolitics of an entire region comes to be encapsulated within a single occasion. To be sure, the ceremony on the banks of the Pyanj River provided a movable feast for politicians, diplomats, the media and strategic thinkers alike. Anyone even remotely interested in the Great Game took note.

It was a microcosm of the highly complex calculus of the politics of Central Asia. Three things became clear.

First, the Great Game in Central Asia not only shows no signs of abating, but it is actually accelerating. Second, Washington is pressing ahead with its "Great Central Asia" strategy, no matter the fluidity of the Afghan (and Pakistani) security situation. Third, Washington has knowingly facilitated an efficient access route for China that leads to the markets in South Asia and the Persian Gulf. Here, the conventional wisdom among the strategic thinkers concerning Sino-US rivalries in Central Asia takes a beating.

The United States has not cared to hide the fact that the primary objective of the bridge over the Pyanj was to provide Tajikistan with a transportation route to the outside world that bypasses Russian territory.
***
That is the new great-power rivalry brewing in Turkmenistan. Simply put, the US wants the new Turkmen leadership to take a serious second look at the 10-year-old idea regarding a trans-Caspian gas pipeline for the European market via Azerbaijan-Georgia-Turkey, which would cut down Europe's growing dependency on Russian energy supplies.
***
Tajikistan's strategic importance needs no repetition - it is a corridor leading to the turbulent Ferghana Valley; it borders China's Xinjiang Uyghur autonomous region; it is a hotbed of militant Islam; it is an oasis of Iranian (Persian) culture; it controls the region's watersheds; it is a principal route for the drug traffickers from Afghanistan; and it is the furthest post-Soviet military outpost for the Russian armed forces on the territory of the former Soviet Union.

Email ThisBlogThis!Share to TwitterShare to FacebookShare to Pinterest
Labels: War on Terror