This might stir things up: Taiwan to build airbase in Spratly Islands 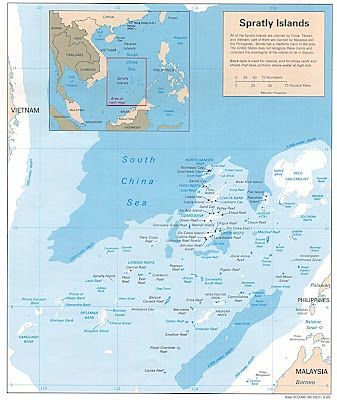 Taiwan is building a military airfield on Itu Aba Island, the largest among the Spratly Islands in the South China Sea, a Taiwan Defense Ministry official told The Yomiuri Shimbun on Wednesday.

Taiwan has claimed sovereignty over the Spratlys, a string of oil-rich rocky outcrops, along with China, Vietnam, the Philippines and other countries.

Planned to be used by C-130 transport planes and other aircraft, the completion of the airfield is expected to cement Taiwan's effective control of the island, observers said.

Covering an area of about 0.48 square kilometer, Itu Aba is the only Spratly island under Taiwan's control.

The 1,150-meter-long, 30-meter-wide runway is scheduled to be completed by the end of this year, with a total construction cost of about 700 million new Taiwan dollars (about U.S.21 million dollars).