Sunday Ship History: "I have not yet begun to fight" 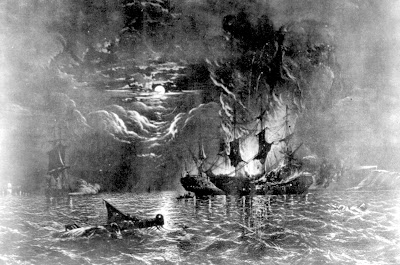 As John Paul Jones wrote of the battle here:

On the morning of that day, the 23d [September, 1779], the brig from Holland not being in sight, we chased a brigantine that appeared laying to, to windward. About noon, we saw and chased a large ship that appeared coming round Flamborough Head, from the northward, and at the same time I manned and armed one of the pilot boats to send in pursuit of the brigantine, which now appeared to be the vessel that I had forced ashore. Soon after this, a fleet of forty-one sail appeared off Flamborough Head, bearing N. N. E. This induced me to abandon the single ship which had then anchored in Burlington Bay; I also called back the pilot boat, and hoisted a signal for a general chase. When the fleet discovered us bearing down, all the merchant ships crowded sail towards the shore. The two ships of war that protected the fleet at the same time steered from the land, and made the disposition for battle. In approaching the enemy, I crowded every possible sail, and made the signal for the line of battle, to which the dalliance showed no attention. Earnest as I was for the action, I could not reach the commodore's ship until seven in the evening, being then within pistol shot, when he hailed the Bon Homme Richard. We answered him by firing a whole broadside.

The battle being thus begun, was continued with unremitting fury. Every method was practised on both sides to gain an advantage, and rake each other; and I must confess that the enemy's ship, being much more manageable than the Bon Homme Richard, gained thereby several times an advantageous situation, in spite of my best endeavours to prevent it. As I had to deal with an enemy of greatly superior force, I was under the necessity of closing with him, to prevent the advantage which he had over me in point of manoeuvre. It was my intention to lay the Bon Homme Richard athwart the enemy's bow; but as that operation required great dexterity in the management of both sails and helm, and some of our braces being shot away, it did not exactly succeed to my wish. The enemy's bowsprit, however, came over the Bon Homme Richard's poop by the mizen-mast, and I made both ships fast together in that situation, which, by the action of the wind on the enemy's sails, forced her stern close to the Bon Homme Richard's bow, so that the ships lay square alongside of each other, the yards being all entangled, and the cannon of each ship touching the opponent's. When this position took place, it was eight o'clock, previous to which the Bon Homme Richard had received sundry eighteen-pound shots below the water, and leaked very much. My battery of twelve-pounders, on which I had placed my chief dependence, being commanded by Lieutenant Dale and Colonel Weibert, and manned principally with American seamen and French volunteers, was entirely silenced and abandoned. As to the six old eighteen-pounders that formed the battery of the lower gun-deck, they did no service whatever, except firing eight shot in all. Two out of three of them burst at the first fire, and killed almost all the men who were stationed to manage them. Before this time, too, Colonel de Chamillard, who commanded a party of twenty soldiers on the poop, had abandoned that station after having lost some of his men. I had now only two pieces of cannon, (nine-pounders,) on the quarter-deck, that were not silenced, and not one of the heavier cannon was tired during the rest of the action. The purser, M. Mease, who commanded the guns on the quarter-deck, being dangerously wounded in the head, I was obliged to fill his place, and with great difficulty rallied a few men, and shifted over one of the lee quarter-deck guns, so that we afterwards played three pieces of nine-pounders upon the enemy. The tops alone seconded the fire of this little battery, and held out bravely during the whole of the action, especially the main-top, where Lieutenant Stack commanded. I directed the fire of one of the three cannon against the main-mast, with double-headed shot, while the other two were exceedingly well served with grape and canister shot, to silence the enemy's musketry and clear her decks, which was at last effected. The enemy were, as I have since understood, on the instant of calling for quarter, when the cowardice or treachery of three of my under-officers induced them to call to the enemy. The English commodore asked me if I demanded quarter, and I having answered him in the most determined negative, they renewed the battle with double fury. They were unable to stand the deck; but the fire of their cannon, especially the lower battery, which was entirely formed of ten-pounders, was incessant; both ships were set on fire in various places, and the scene was dreadful beyond the reach of language. To account for the timidity of my three under-officers, I mean, the gunner, the carpenter, and the master-at-arms, I must observe, that the two first were slightly wounded, and, as the ship had received various shot under water, and ode of the pumps being shot away, the carpenter expressed his fears that she would sink, and the other two concluded that she was sinking, which occasioned the gunner to run aft on the poop, without my knowledge, to strike the colours. Fortunately for me, a cannon ball had done that before, by carrying away the ensign-staff; he was therefore reduced to the necessity of sinking, as he supposed, or of calling for quarter, and he preferred the latter.

All this time the Bon Homme Richard had sustained the action alone, and the enemy, though much superior in force, would have been very glad to have got clear, as appears by their own acknowledgments, and by their having let go an anchor the instant that I laid them on board, by which means they would have escaped, had I not made them well fast to the Bon Homme Richard....

. . . My situation was really deplorable; the Bon Homme Richard received various shot under water from the Alliance; the leak gained on the pumps, and the fire increased much on board both ships. Some officers persuaded me to strike, of whose courage and good sense I entertain a high opinion. My treacherous master-at-arms let loose all my prisoners without my knowledge, and my prospects became gloomy indeed. I would not, however, give up the point. The enemy's mainmast began to shake, their firing decreased fast, ours rather increased, and the British colours were struck at half an hour past ten o'clock.

This prize proved to be the British ship of war the Serapis, a new ship of forty-four guns, built on the most approved construction, with two complete batteries, one of them of eighteen-pounders, and commanded by the brave Commodore Richard Pearson. I had yet two enemies to encounter, far more formidable than the Britons, I mean, fire and water. The Serapis was attacked only by the first, but the Bon Homme Richard was assailed by both; there was five feet water in the hold, and though it was moderate from the explosion of so much gunpowder, yet the three pumps that remained could with difficulty only keep the water from gaining. The fire broke out in various parts of the ship, in spite of all the water that could be thrown in to quench it, and at length broke out as low as the powder magazine, and within a few inches of the powder. In that dilemma, I took out the powder upon deck, ready to be thrown overboard at the last extremity, and it was ten o'clock the next day, the 24th, before the fire was entirely extinguished. With respect to the situation of the Bon Homme Richard, the rudder was cut entirely off, the stern frame and transoms were almost entirely cut away, and the timbers by the lower deck, especially from the mainmast towards the stern, being greatly decayed with age, were mangled beyond my power of description, and a person must have been an eye witness to form a just idea of the tremendous scene of carnage, wreck, and ruin, which every where appeared. Humanity cannot but recoil from the prospect of such finished horror, and lament that war should be capable of producing such fatal consequences.... 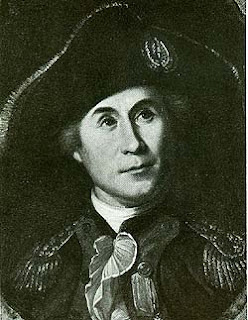 . . . The wind augmented in the night, and the next day, the 25th, so that it was impossible to prevent the good old ship from sinking. They did not abandon her till after nine o'clock; the water was then up to the lower deck, and a little after ten I saw, with inexpressible grief, the last glimpse of the Bon Homme Richard. No lives were lost with the ship, but it was impossible to save the stores of any sort whatever. I lost even the best part of my clothes, books, and papers; and several of my officers lost all their clothes and effects.

According to this, the "most determined negative" was phrased as we know it today:

We had remained in this situation but a few min. uses, when we were again hailed by the Serapis; "Has your ship struck?" To which Captain Jones
answered, "I have not yet begun to fight."

Which is, as noted here, often used as a lesson in leadership:

A leader remains optimistic and enthusiastic. I think to be
an effective leader, you have to be a person who sees that the glass is half full - not half empty. Optimism and enthusiasm are infectious. And, the opposite is true as well. Optimism and enthusiasm overcome the greatest challenges. Captain John Paul Jones, often called the father of the United States Navy, captured this idea in an immortal quote that is echoed throughout American history.

His ship, BONHOMME RICHARD had been riddled by cannon shot from the British ship HMS SERAPIS. When a cannon blast hit the main mast and took his flag with it, the British captain yelled over for Jones to surrender. "I have not yet begun to fight" was John Paul Jonesí reply, and he went on to defeat and capture the HMS SERAPIS, even as his own ship sank.

Some biographies of John Paul Jones here, and the answer to what Jones may have really said here.