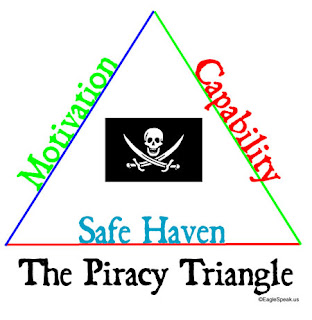 Interesting thoughts on countering pirates from the Journal of Energy Security in a piece by Chris Brewer.

I like his "fire triangle"-like analysis of piracy causes:

Piracy is a product of three causative factors: motivation for gain, ability to project an armed force with the capability to seize vessels in shipping lanes, and safe havens pirates can use for home bases from which they can market their loot. Remove or interrupt any one of these factors and piracy is eliminated or reduced.

Mr. Brewer goes through some technological deterrents that might thwart pirates including the LRAD and its kin, both acoustic and laser. He also offers up a concept of a "self-deploying escort" (my words, not his):

There are of course two major impediments to employing lethal force in defense of ships at sea and those associated with employing weapons from the deck of large vessels carrying volatile cargo, and the risk of fire and explosion. Second, there are political issues involved in cargo vessels entering foreign ports carrying lethal weapons. Some nations simply will not permit civilians with weapons to enter their ports. There are also inherent issues associated with rules of engagement and legal jurisdictions when lethal force is employed by civilian security forces. All of these issues make the use of lethal force problematic for routine defense of vessels, and should only be used as a last resort.

A possible solution to these issues involves moving the defensive platform off the deck of the ship being defended and taking the fight to the pirates while they are still some distance from the ship. By placing a significant portion of a ship’s defenses on board a smaller vessel that can be launched from the mother ship, any counter fire from the pirates will be directed at that smaller vessel, and not at the initially targeted vessel. Assuming a ship has opted to include lethal force in its list of options, this also allows the mother ship to release an armed security vessel before entering a port of call that would not permit entry of armed vessels into their port. The security vessel could be moved from one ship leaving a hazardous sea lane and passed onto another entering, or it could be picked up by a tender that shuttles the security vessels between ships needing protection.
*** 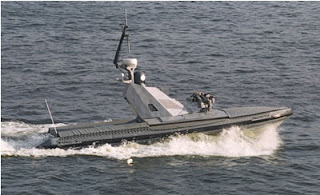 Another option is to employ Unmanned Surface Vessels (USV) equipped with an array of defensive and offensive devices. The US Navy has tested two small, armed USV’s designed to patrol harbors and defend vessels. One such vessel, the Protector, is a 30 foot USV originally built by BAE systems, Lockheed Martin and the Israeli Defense firm RAFAEL, now marketed by Rafael Advanced Defense Systems Ltd. The Protector can be remote controlled from approximately ten miles away allowing it to provide a wide perimeter defense for ships it protects. With new satellite based, broadband technology being developed by Tantara Communications LLC to track shipping containers, it is possible that small USV’s of this type could be controlled from port and be limited only by their fuel range and sea conditions.
***
Another option is the smaller, jet ski sized Sentry manufactured by the British Defense firm Qinetiq. The Sentry has a limited fuel load and operating time, roughly six hours. Its small size makes it practical to quickly launch from cargo vessels encountering hostile small craft a sea. These small craft could be fitted with an array of devices, to include acoustic, microwave, laser and water cannons that would move the active defense well away from the mother ship, delaying or driving off the pirate vessels while the mother ship escapes. The longer range Protector could operate independently at sea to help patrol shipping lanes, with multiple USV’s being tended by one mother ship or a control station at a friendly port in the region.

Protector is a remote-controlled Unmanned Surface Vehicle (USV) equipped with a stabilized mini-Typhoon weapon system (MK 49 Mod 0), cameras, radar equipment and electro optics. Highly autonomous, the Protector can successfully operate with general guidance from a commander and operator in port, riverine, harbor and coastal waterways - making it an innovative solution for today's critical missions, including force protection, anti-terror, and surveillance and reconnaissance.

Mr. Brewer also mentions disabling nets and slippery substances to disable pirate boats and prevents boardings. He raises some interesting ideas. Most of these ideas are expensive, probably affordable only by the larger cargo, tanker and cruise lines.

My analysis of the ships actually captured by the Somali pirates reveals that, with a couple of exceptions, that the ships captured are smaller, slower vessels not owned by Maersk or other major shipping companies, manned by lower cost crews (including a large numbers of Filipinos). Further, some of the suggestions involve have trained operators at the ready to operate some complicated systems and make difficult decisions involving rules of engagement.

I also wonder about the legal status of an operator sitting at a computer in one country who operating a USV who opens fire on suspected pirates without being in imminent danger himself...

UPDATE: Added a graphic of the "Piracy Triangle." Remove any leg and piracy collapses. Right now the emphasis is on the "capability" leg - trying to make it too hard for the pirates to capture ships. It could further be argued that diplomatic steps are being taken to eliminate the Somali "safe haven." On the other hand, "low risk, high rewards" and lack of other options makes the "motivation" side tough to take out.

UPDATE2: From an email from Gulf of Aden Group Transits: First, an analysis of a flaw in a single "self deploying escort" if confronted by a pirate "swarm attack" -

Based on all the tactics and knowledge we have of the pirates, the method and process of launching a small rib tender that is armed is very seriously flawed as they will often work in pairs or greater numbers and will easily bait the vessel to launch to be drawn away while others intercept in greater numbers.

Well, hard to argue with that, especially since it is based on actual experience. GOAGT.org has another tool which seems promising:

We have now developed a polyproplylene net with stainless steel wire braided into it, that is both lightweight and not able to be sliced with a knife, it can also be hooked up to electrical source to give an added ZAP!!

The net comes in 10 mtr wide by 5 mtr high panels and effectively raises the freeboard of the vessel above 8mtrs – and that is our main aim – raise the freeboard so they can't board – you can never stop them firing at you, but if they have no capability to physically get onboard then you are not going to be hijacked.!!