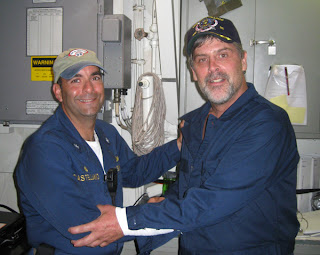 Reported as US sea captain freed in swift firefight:

An American ship captain was freed unharmed Sunday in a swift firefight that killed three of the four Somali pirates who had been holding him for days in a lifeboat off the coast of Africa, the ship's owner said.

A senior U.S. intelligence official said a pirate who had been involved in negotiations to free Capt. Richard Phillips but who was not on the lifeboat was in custody. The Justice Department said it was reviewing evidence and considering criminal charges against the captured pirate.

President Barack Obama praised the U.S. military’s rescue of the kidnapped captain of the Maersk-Alabama cargo ship on the waters off the coast of Somalia today.

“I am very pleased that Captain Phillips has been rescued and is safely on board the USS Boxer,” Obama said in a White House statement. “His safety has been our principal concern, and I know this is a welcome relief to his family and his crew.

“I am also very proud of the efforts of the US military and many other departments and agencies who worked tirelessly to secure Captain Phillips’ safe recovery,” he said. “I share the country’s admiration for the bravery of captain Phillips and his selfless concern for his crew. His courage is a model for all Americans.”

“This was an incredible team effort, and I am extremely proud of the tireless efforts of all the men and women who made this rescue possible,” Gortney said in a U.S. Navy release. Gortney said Phillips’ actions, and those of the Maersk-Alabama crew, were heroic.

“They fought back to regain control of their ship, and Captain Phillips selflessly put his life in the hands of these armed criminals in order to protect his crew,” he said.

Following the rescue, Phillips was taken aboard the USS Bainbridge before being flown to the amphibious assault ship USS Boxer, where he contacted his family, received a routine medical evaluation, and is resting comfortably, according to a U.S. Navy statement.

Three pirates were killed during the rescue operation, and U.S. military forces have one pirate in custody, the statement said.

UPDATE3: Navy SEALS might have been involved? Well, who would have guessed?