Somali Pirates: Another US Ship Carrying Food for Somalis Attacked 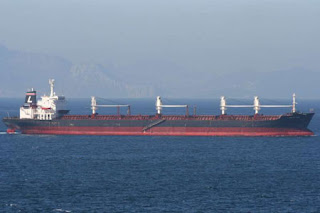 A report of a failed attack on another U.S. flagged cargo ship carrying food for the World Food Program off the east coast of Somalia here:

Pirates attacked a U.S.-flagged cargo ship off the coast of Somalia with rockets and automatic weapons, but failed to board the craft, the ship's owner said on Tuesday.

The crew of the Liberty Sun was unharmed, but the vessel suffered damage, according to a statement from Liberty Maritime Corp of Lake Success, New York.

The ship immediately requested help from the U.S. Navy and was now under escort, the statement said.

"We are grateful and pleased that no one was injured and the crew and the ship are safe," it said.

Liberty Maritime said the pirates fired rocket-propelled grenades and automatic weapons at the vessel, which was carrying U.S. food aid for African nations and was en route to Mombasa, Kenya, from Houston, it said.

Info on the ship here.

Photo of Liberty Sun from Shipspotting.com by Daniel FerroMore and is used in accord with Shipspotting guidelines.
Posted by Mark Tempest at 4/14/2009 11:53:00 PM