Last year the Office of Naval Intelligence analyzed the pirate attacks occurring in the Gulf of Aden, as set out here. Most of these appear to continue to hold true, so I offer them up yet again:

ONI SPECIAL PIRACY ANALYSIS: GULF OF ADEN. The volume of recent Gulf of Aden piracy has allowed the Office of Naval Intelligence to determine factors that represent maximum risk of becoming a hijack victim. Of these, vessel speed at time of attack and time of day are the most significant. Analysis over a two month reporting period included 21 incidents representing both firing incidents and vessel seizure. Suspicious approach incidents that did not involve gunfire were not used in this risk quantification process.

Attacks over the study period occurred in clusters east of longitude 046 degrees 38 minutes east and west of longitude 050 degrees 32 minutes east. Attack activity within these boundaries is likely due to a combination of factors that impact small boat operations such as currents, prevailing winds, sea state, and distance from pirate staging areas.

In addition to increasing standard anti-piracy precautions, all vessels are advised to proceed through the entire Gulf of Aden at maximum possible speed. Vessels with characteristics that put them at higher risk, like maximum speeds of 15 knots or less, as well as those with low freeboard, are advised to minimize risk by transiting as much as possible of the eastern Gulf of Aden in hours of darkness (ONI).

You may note that part about "currents, prevailing winds, sea state." As I have noted, when the winds in the Gulf of Aden or off the eastern seaboard of Somalia are 10 knots or below, the pirates are more active and more successful in their attacks.

Looks like the winds off Somalia for the weekend are very favorable for small boat operations (as may be seen in an increase in pirate attacks), as seen here. Further, the moon (as shown above), is in "waning gibbous", roughly 96% full, thus, providing light for possible night attacks by pirates. See here.

Winds maps for the Gulf of Aden, off east Somalia and for the Syechelles and entrance to Mozambique Channel follow: 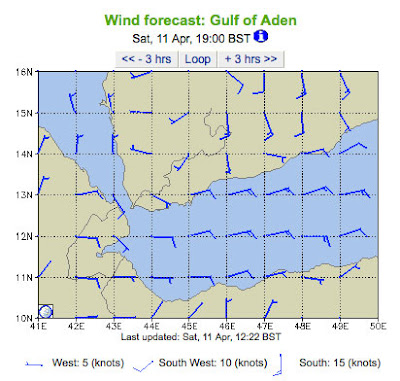 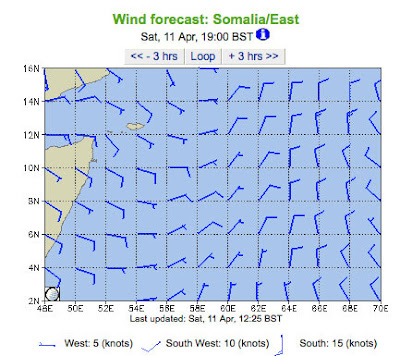 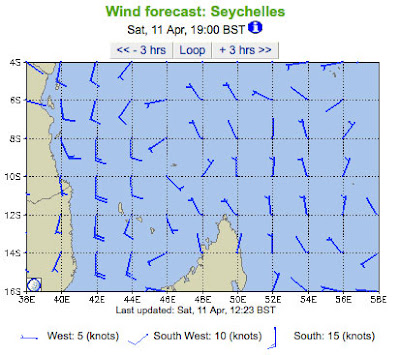 You can also note that the wave heights are mostly under 1 meter. 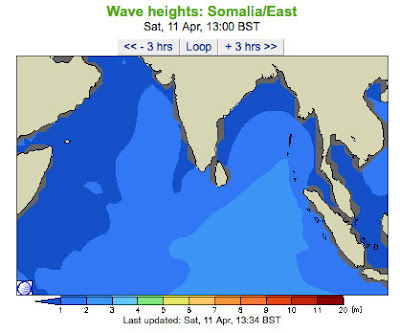 UPDATE: A interesting look at patterns of Somali pirate attacks from maps found at UNOSAT. Note that there the increase in pirate attacks in April follows a pattern, with declines beginning in July then an increase in the Fall. The big decline was when the UIC was in "control" of Somalia. 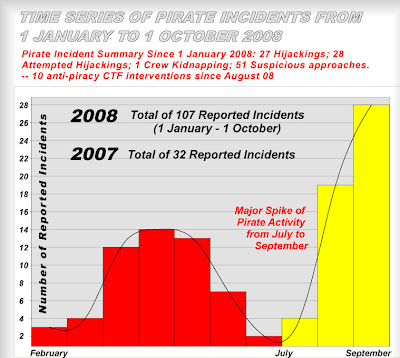 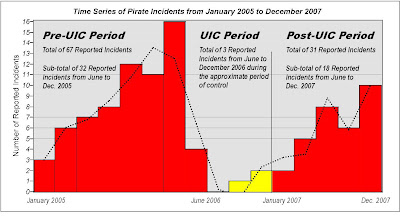