3. GULF OF ADEN: Chemical tanker reported attempted boarding 29 Mar 09 at 2123 local
time while underway in position 11:50N – 044:53E. Men in a speed boat approached and
attempted to board the vessel by using metal hooks and ropes. A crew member on watch heard a
metal knock from the starboard side and saw a metal hook being thrown by one of the men in an
attempt to attach to the vessel, but fell off. The watchman informed the bridge and the general
alarm was sounded. The vessel conducted evasive maneuvering while fire pumps were
activated. Nearby warships were contacted and informed of the incident. A warship proceeded
to the vessel’s direction to provide assistance. A security team boarded the vessel and conducted
a search, but no discretions were found (Operator, IMB).
.
4. GULF OF ADEN: German navy tanker (FGS SPESSART) fired upon 29 Mar 09 at 1204
UTC while underway in position 12:57N – 049:31E. Seven pirates in a skiff opened fire on the
naval ship, mistaking it for a merchant vessel. Men on the ship returned fire, forcing the skiff to
flee. The German ship then pursued the skiff along with Spanish and Greek frigates. The skiff
was halted and boarded by the Greek frigate, who seized the pirates along with their weapons.
The pirates were then transferred to a German frigate to be detained (AFP, AP, Operator).
.
5. GULF OF ADEN: Vessel fired upon 28 Mar 09 at 1400 UTC while underway in position
12:25N – 046:25E. The vessel was approached by one skiff with seven men onboard armed with
AK-47s. The men in the skiff fired shots in the air upon their approach. Coalition helicopters
were dispatched to provide assistance (Operator).
.
6. GULF OF ADEN: Vessel reported suspicious approach 20 Mar 09 at 0600 local time
while underway in position 13:07N – 049:12E. A suspicious craft was sighted by a nearby
tanker and approached her port bow heading towards the stern. The tanker contacted coalition
warships and reported a suspicious craft with about six persons onboard heavily armed. The
craft aborted the approach and then proceeded to the vessel which was located behind the tanker.
When the craft was at a distance of about 3NM from the port bow, the duty officer reported the
position to coalition forces. The craft then crossed their port bow to the starboard side and
reduced speed to 2kts. The master conducted evasive maneuvers, stationed additional lookouts,
and established bridge to bridge contact with coalition warships nearby. A helicopter was
deployed from a warship and arrived in the vicinity to patrol the surrounding areas. The
suspicious craft then aborted the pursuit and moved away towards an undisclosed direction
(Operator, IMB).
.
7. GULF OF ADEN: Bulk carrier (TITAN) hijacked 19 Mar 09 at 1430 UTC while
underway in position 12:35N – 047:21E. Six men in a speed boat armed with AK47s and pistols
boarded and hijacked the vessel. The pirates are in control of the vessel and sailing her to
Somali coastal waters (IMB).

G. WEST AFRICA:
.
1. NIGERIA: Chemical tanker reported attempted boarding 26 Mar 09 at 2220 local time
while at Lagos anchorage. The vessel’s crew noticed a boat with several persons armed with
machine guns, RPGs, and machetes attempting to climb onboard with the use of a rope. All crew
was alerted and the alarm raised. Upon seeing the alert crew, the robbers aborted the attempt and
escaped (IMB).
.
2. NIGERIA: Oil station attacked 16 Mar 09 at Nembe in Bayelsa State. Suspected armed
militants in five gunboats attacked an oil flow station, operated by Royal Dutch Shell, according
to a military spokesman. There was no damage to the oil station, and no injuries reported
(Reuters).
.
3. NIGERIA: Passenger boats attacked, women abducted 14 Mar 09 while underway from
Bonny Island to Part Harcourt. According to a Nigerian military spokesman, gunmen attacked
two passenger boats, forcing the men to jump overboard. They then abducted at least five
women and brutally raped and tortured them. The women were later rescued by the Nigerian
military after receiving a distress call (BBC, LM: Afriquejet).
.
4. NIGERIA: Tanker boarded 11 Mar 09 at 0252 UTC while anchored in position 06:19N –
003:25E, Lagos anchorage. Men armed with guns, knives, and iron rods boarded the vessel and
assaulted the crew. The captain and another crew member were seriously injured. The captain
received medical treatment onboard while the other injured crew member was sent ashore for
medical treatment. The vessel weighed anchor and proceeded away from port. A full report and
more details are awaited from the owners (IMB).

From NATO Shipping Centre, their latest Daily Report as of 3 Apr 09: 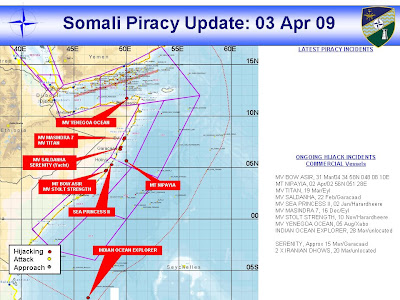 UPDATE: Added wind charts from here. Winds off Seychelles about 5 knots, good for pirates in small boats. From top to bottom: Off east coast Somalia, Seychelles, and Gulf of Aden.

How to interpret wind charts: 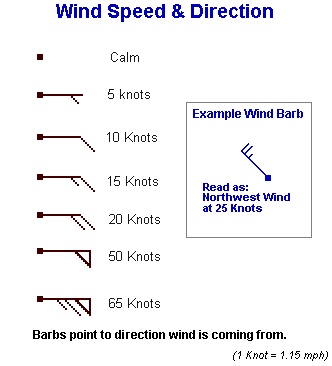