The capture of the Greek-owned MV Irene E.M. and Togo-flagged MV Sea Horse were a clear sign the sea gangs have not been deterred by two raids in recent days by U.S. and French special forces that killed five pirates.

NATO Lieutenant Commander Alexandre Fernandes said the Portuguese warship NRP Corte-Real had received a pre-dawn distress call from the St. Vincent and the Grenadines-flagged Irene E.M. as it traveled through the Gulf of Aden. 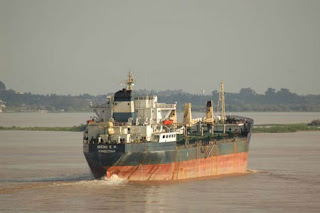 "There was only three minutes between the alarm and the hijack," Fernandes told Reuters aboard the warship. "They attacked at night, which was very unusual. They were using the moonlight as it's still quite bright."

The Greek merchant marine ministry said the Irene E.M.'s 22 crew members were all Filipinos. The bulk carrier was sailing from Jordan to India when it was attacked. Its Piraeus-based owners were not immediately available for comment.

Hours later, NATO officials on the NRP Corte-Real said a second ship, the nearly 5,000-tonne MV Sea Horse, had also been seized by about 77 nautical miles off Somalia.

They said it was hijacked by pirates aboard three or four skiffs, but they had no other immediate details.

Attacks by bright moonlight are not new, but given a feeling that nightime is "safe transit time" needs, as the U.S. Office of Naval Intelligence warned months ago. The pirates are very adaptive.

Once again, a large number of Filipino merchant sailors are added to the pirate hostage group.

UPDATE: In addition, a couple of Egyptian fishing vessels have been captured, as set out here:

On Monday, Somali pirates also seized two Egyptian fishing boats in the Gulf of Aden off Somalia's northern coast, according to Egypt's Foreign Ministry, which said the boats carried 18 to 24 Egyptians total.

UPDATE2:More on the Filipino angle here:

Somali pirates yesterday took 22 crewmen from the Philippines hostage when they hijacked a Greek cargo ship in the Gulf of Aden, Greece’s merchant marine ministry said.

The MV Irene, a Greek-operated vessel flagged in Saint Vincent and the Grenadines, belonged to Chian Spirit Maritime Enterprises Ltd, based in the Greek port of Piraeus, it said.

Its seizure is the ninth hijacking in the Gulf of Aden and Indian Ocean since the start of the month and follows a vow by pirates to seek revenge after an American military operation that rescued a US captain.

At the same time, Taiwan is asking the Philippines to make strong representations with the Somalian government for the quick release and safe return of the 30-man Taiwanese and Filipino crew of a fishing vessel hijacked by Somali pirates off the Seychelles Islands last week.

Aside from the Philippines, Taiwanese authorities and the vessel owners have also sought the assistance of the United States and the United Kingdom for the early resolution of the incident and the safe release of the vessel and its crew.
***
Around half of the 228 seamen aboard 13 ships being held hostage by Somali pirates are Filipinos, according to the International Seafarers Action Center.

“The Philippines, being the home country of most of the victims, should be at the forefront of an international response,” De la Cruz said.

As a last resort, the Philippines should also push the deployment of an international “expeditionary force” with a UN mandate to crush the pirates and rescue the hostages, he said.

He noted that “profit oriented” shipping companies were known to wander into hostile areas to cut travel time, making them vulnerable to attacks.