In May of 1975, in international waters 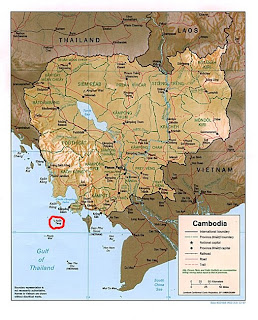 off the coast of southeast Asia, an American container ship and its crew was taken captive by armed men. What followed has been called "the last battle of the Vietnam War" though none of the action took place in Vietnam, Vietnamese waters or involved Vietnamese troops. Instead, the action took place off Cambodia, involved Khmer Rouge forces some of whom used former U.S. Navy river patrol boats in the attack. 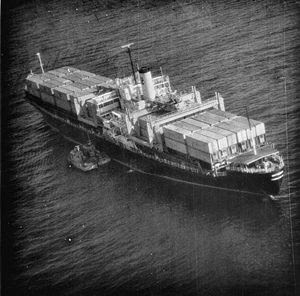 The U.S. flagged vessel that was taken by the Khmer Rouge was known at the time as the S.S. Mayaguez, "She was the first all-container U.S. flag ship in foreign trade." For ten years she had cycled between Hong Kong, Sattahip, and Singapore. On May 12, 1975, her voyage was interrupted by gunboats firing shots across her bow. She was captured by Cambodian Khmer Rouge forces.

The U.S. government decided to take action to recover the ship. Some assert that the reaction was prompted by the recent fall of the U.S. aligned South Vietnamese government and/or the distasteful memory of the capture of USS Pueblo by the North Koreans in 1968. 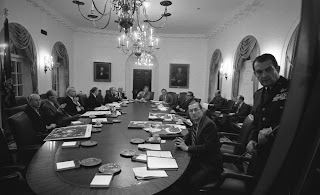 In any event, a crisis team was convened in the White House and various options laid out for President Ford. (photo caption: Acting Chairman of the Joint Chiefs of Staff General David C. Jones (USAF) points to a map of the Cambodian coastal region at a late night meeting on the seizure of the American merchant ship S.S. Mayaguez by Cambodian gunboats. (source). As set out in a now declassified annex to the 1975 CINCPAC Command History:

Cambodia had fallen to the communists on 17 April 1975 and the fall of the Republic of Vietnam followed closely behind on 30 April 1975. On 12 May 1975 the American Embassy in Vientiane advised that the Pathet Lao had moved quickly t o exploit the virtual disappearance of the Vientiane side and to exert control over government operations, commercial activities, and movement of persons there. In the wake of these events, most United States Forces had departed the immediate area except for those in Thailand. In the midst of this s i t u a t i o n , the MAYAGUEZ incident tested the United S t a t e s crisis action capabilities.
***
It was 0718 Zulu (Z) hours on 12 May 1975 when Mr. John Kean of Delta Exploration Company in Jakarta, Indonesia received a "Mayday" (distress) call from the United States merchant ship

Have been fired upon and boarded by Cambodian armed forces a t 9 degrees 48 minutes north/l02 degrees 53 minutes east. Ship is being towed to unknown Cambodian port.

CINCPAC received this information at 09142 hours 12 May 1975 in a message from the American Embassy, Jakarta. This notification was similarly received by the White House, the National Security Agency (NSA), the Central Intelligence Agency (CIA), the Defense I n t e l l i g e n c e Agency (DIA); and the National Military Command Center (NMCC) at the Pentagon. Based on the message, CINCPAC contacted the Joint Chiefs of S t a f f (JCS) and discussed assets available to reconnoiter the scene of the incident; thus initial preparations f o r the MAYAGUEZ operation were begun, pending the outcome of State Department attempts to make contact through diplomatic channels. As the situation developed, diplomatic channels were determined at executive level to be unsatisfactory and military means were employed t o recover the MAYAGUEZ and release her crew.

The MAYAGUEZ seizure, which began the chain of events leading to military action, was not a totally isolated incident, lacking any indications as to its possible occurrence. CINCPAC observed that adequate and timely warning was provided on earlier Khmer Communist acts against foreign shipping.In any event, the notice of the capture was followed by additional direction to CINCPAC to launch reconnaissance aircraft: CINCPAC provide continuous P-3 surveillance over the Gulf of Siam north of 8 degrees north and east of 101degrees east , no closer than 12 nautical miles to the Cambodian-mainland, islands excluded...From this guidance, CINCPAC further instructed CINCPACFLT to report sightings of Cambodian naval units as well as the captured MAYAGUEZ, and o b t a i n photos of Cambodian naval units as feasible. This mission was, in turn, passed to the Commander, Philippine Air Patrol Group (CTG 72.3), who had P-3 aircraft located at his primary base of operations, Cubi Point, Republic of the Philippines, and at his logistic base and refueling. stop, U-Tapao Royal Thai Naval Air Station, Thailand. A t 07662 hours, 13 May a P-3 reported positive identification of the MAYAGUEZ a t 9"56' N , 102"58' E.

It was unclear at this point where the crew of the Mayaguez was being held. Surveillance provided some clues:

The above indications, which led to the conclusion that the MAYAGUEZ crew was being held on Koh Tang Island, prompted the actions taken to isolate the island and the MAYAGUEZ. The objective was to prevent the crew and ship from being taken to mainland Cambodia, thus avoiding a situation similar to the PUEBLO affair of 1968.
***
The only other indication as to the possible location of the MAYAGUEZ-crew during the incident, prior to their release, came about 01032 hours 14 May, when a P-3 observed “...fishing boat, with possible Caucasians huddled in the bow ...” heading from Koh Tang Island toward the Cambodian mainland. Other United States Forces i n the area at that time, which had also observed the boat, included four A- 7, two F- 4, one C-130, two F-111, and one KC- 1 35.

Wheels were in full spin:

As CINCPAC's on-scene commander during the MAYAGUEZ operation, USSAG/7AF was tasked to develop, submit for approval, and execute a multi-Service air assault, and surface plan for the recovery of the MAYAGUEZ and an assault on Koh Tang Island in little over 16 hours. Time constraints did not provide sufficient time for detailed operation orders.

From this came the following early plan:

The initial operational concept involved use of the nearest available assets, Air Force security police. They were to make a helicopter assault directly onto the MAYAGUEZ at first light on 14 May; however, as the situation developed, incoming Marines replaced the security police in what was planned to be a simultaneously executed two-phase operation to recover the MAYAGUEZ and release her crew, supported by air strikes on mainland Cambodia.

In addition, the following taskings had already been directed:

The essence of COMUSSAG/7AF's initial operational concept was as follows:

Higher authority has directed that all necessary preparations be made for potential execution early on the 15th to seize the MAYAGUEZ, occupy Koh Tang Island, conduct 8-52 strikes against the port of Kompong Som and Ream Airfield, and sink all Cambodian small craft in target areas.

CINCPAC was now tasked to plan for and execute, when directed, the following operations:

Intelligence shortly a f t e r the fall of Cambodia (17 April 1975) reported the existence of 18-20 people on the island at that time. IPAC disseminated this information by an intelligence spot report (SPOTREP) on 13 May.

In a second SPOTREP, following closely behind the first, IPAC estimated the maximum of one Khmer Communist company (90-100 men) reinforced with a heavy weapons squad to be on the island; however, t h i s report apparently did not reach the Marine GSF commander prior to the assault on the island, although i t did reach the transporting helicopter commander and others.

According to Major J.B. .Hendricks, Operations Officer of the Second Battalion of the Ninth Marine Regiment (2/9), from which the Koh Tang Island assault force was drawn, their briefings informed them "... that there were 20-30 Khmer Rouge irregulars on the island, possibly reinforced by whatever naval support personnel that were there associated w i t h the gunboats sighted in the area." A DIA appraisal which appeared i n the JCS after action report on the incident estimated approximately 150-200 Khmer Communists on the island at the onset of the operation; however, there was no indication that this specific appraisal was generally available prior to the assault.

Maps of the island were not suitable for planning an invasion. After a sorting out process, it was decided that it would be less risky to take USS Harold E. Holt alongside the merchant ship and have the Marines go over the side to board the Mayaguez instead of trying to put them on board by helicopter.

Plans were revised again and now looked like this:

The following were the key elements...

Subsequent operations followed this concept closely; with tactical air from the USS CORAL SEA being substituted for B-52s i n the mainland strikes.Planning was over. Time for action:

The operation began with the first insertion of Marines on Koh Tang Island at about 22552 14 May (0555G 15 May) and the landing of the boarding party on the USS HAROLD E. HOLT at about 23052 14 May (0605G 15 May). Although the USS HOLT met no opposition, and the boarding party was i n complete control of the Mayaguez within about two hours (01282 15 May), the Marine GSF and transporting USAF helicopters met fierce opposition from the beginning. Their ordeal lasted about 14 hours (last Marines extracted at about 1310215 May). The MAYAGUEZ crew had been identified as safe aboard the USS WILSON within about 4 hours (03082 15 May) a f t e r the initial assault on the island; however, because of the strong enemy opposition encountered on the island, reinforcements were required to stabilize the situation and successfully extract the Marines. 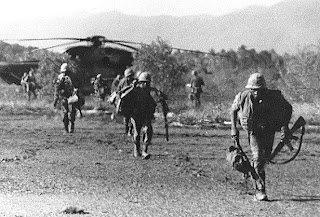 During the initial insertion of Marines on Koh Tang Island, concern for the safety of the MAYAGUEZ crew, believed to be on the island, precluded landing zone preparation by air strikes or naval gunfire. Even after confirmation of the crew's recovery, fast A-7 Forward Air Controllers (FACs) were unable to pinpoint locations of friendly units and suppress enemy fire because of the confines of , and confusing situation on, the battlefield. It was not until 09302 15 May that two OV-10"Nail" slow FACs, w i t h loitering ability, were on station to pinpoint friendly positions for effective close air support.

Also, it was not until 07352 15 May that the first helicopter was able to recover to the CORAL SEA rather than return to U-Tapao (helicopters used were a mix of HH-53 air-refuelable "Jolly Green," and CH-53 non-air-refuelable "Knife" aircraft).In summary, the Koh Tang Island phase of the MAYAGUEZ operation involved the insertion of 231 Marines and subsequent evacuation of 227 (there were three missing in action and one killed in action left on the island) in the face of severe enemy fire. A total of 15 USMC, USAF, and USN personnel were killed i n action, 49 wounded in action, and 3 Marines missing in action.

Whether or not the intended goal of restoring respect to the United States was attained by the rescue effort, the effort was made. As CINCPAC has noted, “...with full benefit of hindsight we could have done a number of things better. Life is like that, and there is no reason we should not acknowledge it.”

Those that died in the operation had their names added to the Vietnam Memorial Wall in Washington.

And today we offer them this small salute.