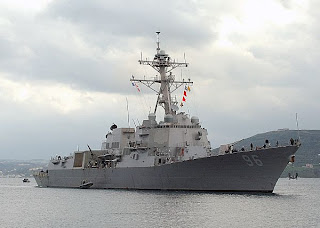 Following up on prior reports (see here), the standoff with the pirates in a lifeboat from the Maersk Alabama continues.

According to the Associated Press what has changed is that the Maersk Alabama is headed to Kenya to unload its cargo. U.S. Federal Bureau of Investigation hostage negotiators are both helping the captain of the Navy destroyer, Bainbridge talk to the pirates and may have a team en route to the scene. The pirates and the U.S. Navy (and perhaps other coalition forces) are sending additions vessels to the area where the life boat sits.

According to Fox News, the hostage captain, Richard Phillips, tried to escape the pirates by swimming away from the lifeboat, but was recaptured by the pirates.

If this matter follows the usual course of hostage taking by the Somali pirates, it may last several months until the pirates feel they can safely receive a ransom for Captain Phillips. So long as the pirates have Captain Phillips in captivity, however, the options available to the military are limited. See here.

gCaptain has an excellent report on the enclosed lifeboat involved in this standoff here. The picture of a lifeboat nearby is borrowed from that post.

Some of the press coverage has been adequate, especially since none of the press agencies have reporters on the ships involved in the incident.

Some of press "reports" have been the purest speculation, with wild guesses made by people who are, apparently, clueless. My favorite example of "bad reporting" is here, where author Jeremy Scahill gets nearly every fact wrong. For example,in his update to his article, he breathlessly reports that the U.S. Navy is sending a "nuclear-powered warship." This is an apparent reference to USS Bainbridge (DDG-96). The current Bainbridge is a Burke class destroyer, powered by gas turbine engines. Mr. Scahill has apparently mixed this ship up with the long decommissioned USS Bainbridge (CGN-25), taken out of service thirteen years ago. It's an easy mistake to make, given that the name is the same, but about 30 seconds worth of research would have prevented that error. Scahill makes a big deal about the DOD contracts Maersk has, completely failing to point out that the ship was bound to Mombasa with humanitarian supplies. But then again, that sort of factual reporting doesn't seem to be his goal.
Posted by Mark Tempest at 4/10/2009 07:47:00 AM