Transportation by water has a lengthy history, some of which has been on man-made waterways, as has been touched on at this site before. See here, here, here.

But long before the Erie Canal, the Suez Canal, the Panama Canal, or the canals of Venice or Holland or the rest of Europe or the Middle East, there was the Grand Canal of China, one of the great, mostly unsung man-made marvels:

The Grand Canal of China is the world's oldest and longest canal, far surpassing the next two grand canals of the world: Suez and Panama Canal.
***
The canal is 1,795 Km (1,114 miles) long with 24 locks and some 60 bridges.

I don't know about "oldest" because history tells us there were canals being built by others sooner:

Between about 520 and 510 BC the Persian emperor, Darius I, invests heavily in the economy of his newly conquered province of Egypt. He builds a canal linking the Nile and the Red Sea.

It most certainly is the oldest still in use.

The Chinese seem to have gotten started 100 years or so later, but that does nothing to diminish their achievement. While the defensive masterpiece Great Wall gets most of the publicity, people who study logistics and their impact on the spread of civilization will probably be more impressed with the Grand Canal:

The Grand Canal system (or Da Yun He) represents a remarkable achievement of imperial Chinese hydraulic engineering. At its peak during the Ming dynasty (1368-1644 AD), the system totaled about 2,500 kilometers with Beijing at its northernmost extension, Hanghzou at its southernmost point and Luoyang at its easternmost point. It thus connected the political center of the empire in the north (especially from the Song dynasty; 960 AD), with the economic and agricultural centers of central and southern China. This was mainly achieved by linking two of China's most important river basins, the Yellow River (Huang He) and the Yangtze River (Chang Jiang). North of the Yangtze, the canal must ascend a gradual slope to an elevation of more than 40 meters. To insure safe circulation, a system of locks (the Chinese are attributed to the first lock ever built in 983), feeder lakes and lateral canals was constructed. Under such circumstances, the control of an unified China became a possibility and the Grand Canal is acknowledged to be a significant element in the economic and political stability of imperial China, mainly through grain distribution.

What the canals did was to open up the empire:

Over the centuries more and more such canals are constructed. Finally, in the Sui dynasty (7th century AD), vast armies of labourers are marshalled for the task of joining many existing waterways into the famous Grand Canal. Barges can now travel all the way from the Yangtze to the Yellow River, and then on up the Wei to the western capital at Xi'an.

Along this great Chinese thoroughfare the rice harvest of the Yangtze is conveyed to the centres of political power in the north. 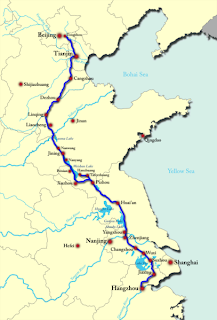 From the 13th century there is a new northern capital. Kublai Khan establishes himself at Beijing, which becomes the capital of the Mongol or Yüan dynasty. The Mongols extend the Grand Canal all the way north to join Beijing's river at T'ien-ching.

Grain and other goods, raw materials and finished product now have new markets and new value. From a military point of view, the canal system improved the interior lines of communication, see here. From a social point of view, it tied the diverse parts of China together.

In order to get barges up the river and past rapids, the Chinese invented the "lock" system:

The development of the more sophisticated pound lock is traditionally credited to an engineer, Chiao Wei-yo, working on the great Chinese canal system in the 10th century AD.

It is said that Chiao is required to construct two flash locks on the Grand Canal only about 200 yards apart. He realizes that he has created a pool which will be at the upper or lower level of the canal depending on which of the two barriers is open. Moreover the barrier separating patches of level water can be opened without the obstruction of water pressure. 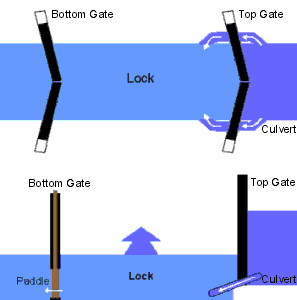 The result is the pound lock, standard on all modern canals. The first in Europe is believed to have been built in the Netherlands in 1373 at Vreeswijk, where a canal from Utrecht joins the river Lek.

At this stage the barrier is a simple sluice gate which has to be raised and lowered like a guillotine. The process is laborious, and the water pressure against the flat surface requires a very strong construction to hold it.

Whatever, it worked. For a few hundred years it worked. More on the "pound lock" here.

Parts of the system are still in place and in use as the old meets new along its path:

Pollution control may need to be improved... 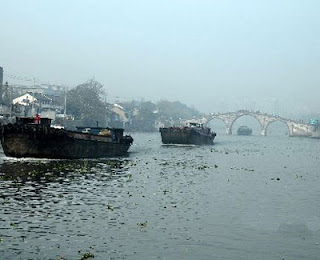 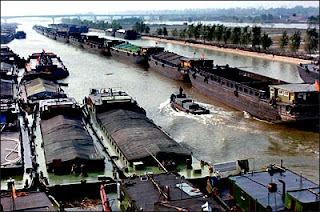 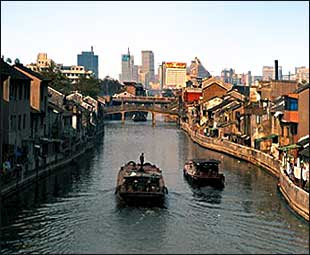 Today, long stretches of the 1,800 kilometre-long waterway are polluted or impassable, but many other parts of the canal are working waterways which annually shift three times more cargo than is moved by rail between Beijing and the Lower Yangtze region.
***
The Grand Canal was the major cultural and economic arterial system linking north and south China for nearly one and a half millennia. Like the Great Wall, it defines a major cultural landscape in which it is the central engineering monument. Unlike the Great Wall, it was designed to serve as a transport route that provided an economic and cultural conduit through the heartland of the nation.

The last article has some interesting modern updating:

In 1949, the Communist victors in China's civil war inherited the Grand Canal at a time when large-scale engineering projects were regarded as testimonies to social advancement. Chinese engineers looked with enthusiasm to the day when the Grand Canal could be restored after a century of decay and neglect and rank among the world's great waterways–Panama and Suez, the St. Lawrence Seaway and Stalin's canal network that, with rivers, effectively linked the Baltic, White and Black seas. The new Chinese government set about clearing unexploded ordnance from the bridges, locks and dykes, a legacy of the civil war in which Chiang Kai-shek had no compunction in including flooding in his arsenal for warfare. There were many reports in the Chinese press of explosions occurring along the Grand Canal during 1949 and 1950, but by the end of 1950 most landmines and bombs had been cleared away.

In 1958, the Chinese government announced a major plan to dredge and revive the Grand Canal. Transportation and irrigation, as well as flood mitigation and prevention, were all targets within the sights of the project's engineers, and offices to coordinate the massive dredging and construction projects were set up in each province along its length. Farmers, workers, clerks, students and soldiers were all dragooned into voluntary work between 1958 and 1961 to realise this grand plan, part of the Great Leap Forward, an enterprise which must have come at great human cost during this period now acknowledged to have ushered in famine and starvation. Nearly 160 million cubic metres of earth were excavated during these three years, but only 3.7 million cubic metres of this massive amount was shifted by machine.

During this period seven major locks–at Xietai, Liushan, Siyang, Huaiyin, Huai'an, Shaobo and Shiqiao-were completed, and three major coal ports were constructed – at Wanzhai, Shuanglou and Pixian. A large railway bridge spanning the canal was constructed in Xuzhou, as were highway bridges across the canal at Xuzhou, Huaiyin and Yangzhou. In Shandong a large lock was constructed serving the four lakes collectively called Weishan lake. This afforded passage of the canal across the lake's 140 km from north to south. A large bridge also spanning the Grand Canal was constructed in Jining, Shandong province. Many of the achievements of the gargantuan efforts and labours of these years fell again into neglect with the Cultural Revolution and its aftermath.

A revival of the Grand Canal began in 1984, according to Fu Chonglan, who has been a passionate observer of the canal over the past two decades, when state planners sought to revive the neglected and rundown canal with massive planning and investments, again targeting the various tasks the canal was intended to address, ranging from transportation to flood relief. In 1985, this work focused on the stretches of the canal south of the Yellow River from Jining to Yangzhou, and the sections of the canal south of the Yangtze from Zhejiang to Hangzhou. Much of the canal between Tianjin and Dezhou had ceased to flow, and sections of the canal had been cut between Beijing and Tianjin. Grand Canal is basically now only navigable without interruption from Jining southwards to Hangzhou. Unlike many conservators, Fu Chonglan argues that, if the Grand Canal is a central component in the massive project to bring water from southern China to the nation's dry north, best known as the South-North Water Transfer (SNWT) Project, its future is rosy.

Ah, I do love rosy scenarios.

A recent article in the U.S. Naval War College Reviews compares the old "Grand Canal" with China's new "canal' - the sea lines of communication that it needs to thrive:

Over a millennium ago, a waterway known as the Grand Canal, connecting the seaport of Hangzhou with Beijing in the north, became a critical artery for the dynamic growth of Chinese civilization. In the last decade,
the sea lines of communication (SLOCs) connecting China to the Middle East
and Africa have assumed a similarly vital role as a major “center of gravity” for
Chinese economic development. With Chinese oil demand growing rapidly and
seaborne oil imports constituting more than 80 percent of total oil imports,
China’s new “Grand Canal” has also become a vital oil lifeline.

While we ponder modern logistics flow, it's time to tip your hat to the Chinese laborers (of whatever vintage) that put together the older, still amazing man-made waterway known as the Grand Canal.
Posted by Mark Tempest at 4/26/2009 03:30:00 PM