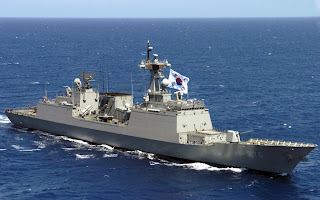 A Republic of Korea destroyer, ROKS Munmu the Great (DDH-976), dispatched its helicopter to scare off some pirates getting ready to board a small zig-zagging Danish freighter about 70 miles off Yemen, as reported here:

The Munmu the Great destroyer, carrying a crew of 300, received a distress call from the ship which reported it was being chased by a pirate boat, said Army Colonel Lee Hyoung-Kook, a JCS official who oversees the deployment.

The 2,500-ton ship Puma -- carrying a generator from Singapore to Germany with a crew of three Danes, four Filipinos and five British security guards -- was about 55 kilometres from the South Korean destroyer.

"The crew of the Puma, upon seeing Friday six pirates in an outboard motor boat approaching at full speed, began to zig-zag to keep them from boarding, and fired a distress flare in their direction," said Shipcraft director Per Nykjaer Jensen.

That gave them just enough time for the Puma to call for help from international naval forces in the area, he told AFP.

The South Korean destroyer dispatched its Lynx anti-submarine helicopter, which arrived at the scene in just over 20 minutes, Lee said.

"The pirates gave up (their) attempt to board the ship and turned away when the helicopter threatened to fire," he said.

Jensen agreed that the helicopter's arrival saved the Puma from being seized, but he added: "We are really frustrated by these intolerable conditions whereby the pirates more often than not get away with impunity."