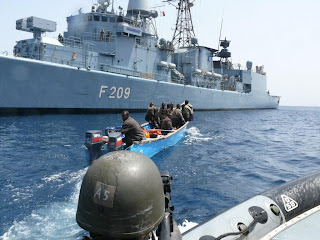 So says Peter D. Zimmerman on the op-ed side of the Wall Street Journal here:

Pirates, like the Nazi submarines of World War II, do not hunt for their targets; they lie across the sea lanes where ships are likely to travel and simply wait for a victim to come over the horizon. And the same tactic which defeated the U-boats can put an end to the majority of pirate attacks. Merchant ships can be ordered to form convoys for their own protection.

Thirty thousand ships a year, roughly 100 a day, 50 in each direction, transit the waters off the coast of Somalia. One convoy in each direction, each day, alternating between fast ships and slower ones, and each accompanied by four or five escort vessels, would do the job. There would then be only two targets a day in each area of coast for the pirates to find, instead of 100. When marauders approach a convoy, they could be warned off by the escorts or destroyed if they attack.

Convoys have historically been the antidote to piracy on the open seas, and they can defend against these attacks once again. Modern naval escorts, equipped with helicopters, have the ability to establish a perimeter around the merchant ships, the firepower to stop a pirate, the legal jurisdiction to do so under the Convention on the Law of the Sea, and the ability to deliver their prisoners for trial.

Of course, you may have already heard that "convoy" argument (or here). Or, you may know that World Food Program has been using escorts for some time to get food ships through the pirates. And that Canada was an early leader in using its ships to save lives by escorting food to the starving Somalis, along with other NATO forces:

The Netherlands and NATO have responded to an appeal from the United Nations World Food Programme for naval escorts to protect its ships carrying life-saving assistance from pirate attacks off Somalia. More than 2 million Somalis could go hungry without this protection.

Two NATO navy ships operating in Operation Allied Provider are escorting these three vessels, in order to protect them against piracy.

Now, the European Union has taken on the protection of food shipments into Somali ports, as set out here:

The EU force will provide escort vessels to WFP for up to a year. This will ensure that there should not be any breaks in protection nor a need for frequent appeals for replacements – the case until now.

The EU’s “Operation Atalanta” includes naval escorts for WFP ships, escorts for commercial shipping, aerial surveillance and measures to deter, prevent and intervene in order to bring an end to acts of piracy and armed robbery off the Somali coast. It is the first-ever EU naval operation and was established under the French Presidency of the European Union.

You may be surprised to learn that Maersk Alabama was part of that feed the Somalis program:

Somali pirates are in danger of again threatening food supplies for the war-ravaged East African country, the UN food agency warned on Tuesday. "Piracy is a constant concern for the World Food Programme," said spokeswoman Emilia Casella - noting that 90 per cent of the aid to Somalia is delivered by sea.

The Maersk Alabama with its American crew were captured last week as they were delivering food aid to Africa. More than half of the 200 containers on the ship were destined for the WFP.

Casella said the agency plans to give food to 3.5 million Somalis this year.
***
WFP ships or contracted vessels, like the Maersk Alabama, going to the Kenyan port of Mombasa, do not receive a military escort. 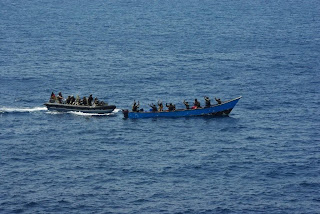 This was the first time a Mombasa-bound aid vessel had been captured, raising concerns that the delivery of humanitarian help could be affected.

About 200 ships with food aid arrived at the Kenyan port last year.

Deliveries from Mombasa to Somalia itself, however, are covered by Western warships, a programme seen as vital for the WFP.

"Without these escorts we'd be at risk of not being to bring food to Somalia," Casella said.

Before the escorts began in 2007, several WFP ships were hijacked by pirates. In the summer of 2008 there was a six week period when there were no warships to accompany the humanitarian vessels and all food delivery stopped until Canada arranged for escorts. Currently, the European Union has taken the responsibility of accompanying the food.

So, yes, convoys do work.