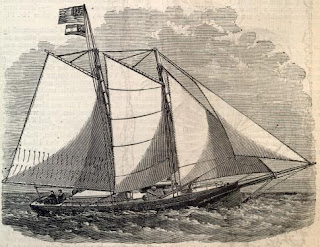 Got a call from a reporter: "You know that the U.S. government is bringing one of the Maersk Alabama Somali pirates back for trial. Do you know when the last trial of a pirate took place in the United States?"

After the call I did a some quick research. And came up with very little. There was the threat of trying some German saboteurs for piracy as the result of their actions during WWI (the Fay case) - see here, but the accused plead guilty so there was no trial.

Before that, in 1861, the crew of a Confederate Sates privateer was tried for piracy - in the Savannah case. This may be the last time anyone was tried for sea piracy in a court in the United States, though I am prepared to be corrected on that point.

The Savannah case turns out to be pretty interesting. The basic facts are simple enough.

Out of the port of Charleston, South Carolina, came forth the sailing vessel Savannah. She attacked and captured a ship at sea and then attacked another. Much to the surprise and regret ofher crew, the second vessel turned out to be U.S. Navy warship, which turned the tables on Savannah, taking the ship and her crew into custody.

The crew of Savannah was not hanged from a yardarm after a trial at sea. Instead, a trial was ordered up and convened in a New York courtroom. The charge was piracy.

The crew of Savannah offered up a defense. "We're not pirates," they argued, "we're privateers."

What's the difference? Piracy, as Blackstone opined in his Commentaries on the Laws of England:

...[T]he crime of piracy, or robbery and depredation upon the high seas, is an offence against the universal law of society ; a pirate being, according to Sir Edward Coke, hostis humani generis. As therefore he has renounced all the benefits of society and government, and has reduced himself afresh to the savage state of nature, by declaring war against all mankind, all mankind must declare war against him : so that every community hath a right, by the rule of self-defence, to inflict that punishment upon him, which every individual would in a state of nature have been otherwise entitled to do, any invasion of his person or personal property.

BY the ancient common law, piracy, if committed by a subject, was held to be a species of treason, being contrary to his natural allegiance ; and by an alien to be felony only . . .

On the other hand, a privateer is an entirely different kettle of fish. A privateer is, well, a pirate with authorization to carry out his work from a government:

A privateer was a private warship authorized by a country's government by letters of marque to attack foreign shipping. Strictly, a privateer was only entitled by its state to attack and rob enemy vessels during wartime. Privateers were part of naval warfare of some nations from the 16th to the 19th century. The costs of commissioning privateers was borne by investors hoping to gain a significant return from prize money earned from enemy merchants.

It has been argued that privateering was a less destructive and wasteful form of warfare, because the goal was to capture ships rather than to sink them. From a 21st century point of view, privateering was a form of state-sanctioned piracy.


The Congress shall have Power ... To declare War, grant Letters of Marque and Reprisal, and make Rules concerning Captures on Land and Water

So? Letters of marque and reprisal are permission issued to someone to commit what would otherwise be acts of piracy.

Ah. Well, how did the crew of Savannah claim to be privateers? They argued that they had been issued letters of marque and reprisal by their government, the Confederate States of America and were thereby committing acts of war in the fight between the CSA and the USA and were not, therefore, pirates.

The U.S. government, however, had a differing view and put the crew on trial for piracy:

Through much of the first year of the war, the government in Washington continued to regard the conflict as merely an insurrection, and that the Confederate government had no legal standing. According to the view of the Lincoln administration, the letters of marque issued by Jefferson Davis or the seceded states had no legal force, and the privateersmen who relied upon them did not represent a legitimate authority. Taking merchant vessels on the high seas therefore was piracy, which the penalty for upon conviction was death.

The first trial for piracy was of the 13 men, including Captain Thomas H. Baker, captured on privateer Savannah. The trial was held in the United States Circuit Court for the Southern District of New York. It began on 23 October 1861, and from the start attracted wide public notice. The mere fact of the trial drew outrage in the Confederacy, where the government threatened retaliation, life for life. To increase pressure on Washington, the prisoners of war who would have been executed in retaliation were selected and their names made known.

Mr. Sullivan, for defence, said the issue of the cause was narrowed down to a simple point. It was proved that the defence did capture a brig on the ocean, which brig belonged to citizens residing in the State of Maine, and the cargo belonged to citizens in the United States. That the counsel would admit it had been proved, further, the the persons who captured the brig and cargo alleged they did so in the name of the Confederate States of America, and by authority derived from them. Upon that simple fact . .. rose the sole point of dispute. the intent of the prisoners was to comply with the regulations prescribed by their government, not to steal and rob. He next considered the right of the Confederate States to issue letters-of marque, taking the ground that the United States had recognized their government in all their dealings, and consequently the right to issue letters=-of-marque should also be recognized. Considered by impartial minds, the attitude of the Government towards the prisoners was inconsistent with its position towards the Confederate States.

Apparently some of the minds on the jury were "impartial" for the case resulted in a hung jury.

Soon there may be another trial of an accused pirate in a New York court room. It will be interesting to see.

More on the capture of the Savannah here.

Please let me know if you are aware of any later trials for piracy in an American court. Thank you.