Threats to Shipping Reports and Winds off Somalia 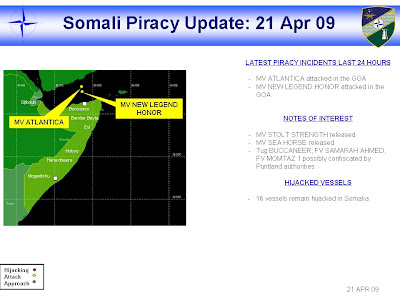 A look at winds off Somalia (from here. Note that they are picking up in the area to 10 to 15 knots. Based on history, expect reduced pirate attacks during times winds exceed 10 knots.

Winds affect the waves, which are also up (heights in meters): 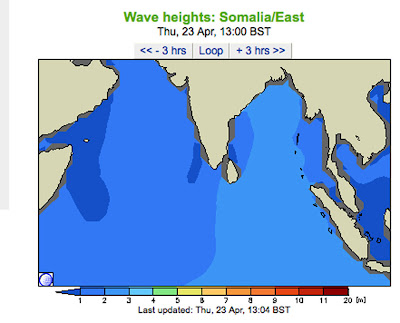 1. INDIAN OCEAN: French Navy thwarts pirate attack, 15 Apr 09. French naval forces launched an early-morning raid on a suspected pirate "mother ship" 550 miles east of Mombasa and seized 11 men, thwarting an attack on the Liberian cargo ship (SAFMARINE ASIA), the French Defense Ministry said. No one was injured. The ministry said the vessel was a larger boat that pirates use to allow their tiny skiffs to operate hundreds of miles off the coast. French Foreign Ministry spokesman Christophe Prazuck said a French helicopter in the area heard a distress call from the Safmarine Asia. He described the seized ship as a small, noncommercial vessel carrying fuel, water and food supplies. The 11 pirates, believed to be Somalis, were being held on the Nivose, a French frigate among the international fleet trying to protect shipping in the Gulf of Aden (Bloomberg, AP).
.
2. INDIAN OCEAN: US Navy frees captain of the container ship (MAERSK ALABAMA),
13 Apr 09. The life of container ship captain Richard Phillips was in danger when Navy snipers aboard a U.S. destroyer shot at his Somali captors on Sunday, freeing him unharmed and killing three of four pirates who had held him after trying to seize his vessel, the Navy said. The fourth pirate was in custody. A US Navy commander made a split-second decision to fire on the pirates because he believed that Phillips, who tried to escape on Friday, faced imminent danger amid tense hostage talks with his captors and deteriorating sea conditions. "They were pointing the AK-47s at the captain," Vice Admiral William Gortney, head of the U.S. Naval Central Command, said in a Pentagon briefing from Bahrain. "The on-scene commander took it as the captain was in imminent danger and then made that decision (to kill the pirates) and he had the authorities to make that decision and he had seconds to make that decision." President Barack Obama granted the Pentagon's request for standing authority to use appropriate force to save the life of the captain, Gortney said. The U.S. Navy 5th Fleet in Bahrain said the rescue took place at 12:19 p.m. EDT (1619 GMT) and the lifeboat had drifted to about 20 miles (32 km) from lawless Somalia's coast. Phillips, captain of the U.S.-flagged (MAERSK ALABAMA), contacted his family after the rescue, received a routine medical evaluation, and was resting comfortably aboard the amphibious assault ship (USS BOXER) (Reuters).
.
3. INDIAN OCEAN: French Navy frees hostages in rescue operation off Somalia, 10 Apr 09. Four hostages, including a child, were freed from the hijacked yacht (TANIT) after almost a week of captivity, the French president's office in Paris said Friday. The four adults and a child had been held aboard their yacht since it was seized in the Gulf of Aden on Saturday, the president's statement said. The military made its move after the pirates refused their offers, including one to swap an officer for the mother and child held aboard, and threatened to execute the hostages one-by-one -- and because the (TANIT) was drifting closer to the Somali coast, the
defense ministry said. The possibility that the pirates could take their hostages ashore was a red line that prompted the mission. The same red line triggered two successful rescue missions by the French military last year, the ministry said. According to French media reports, a special forces unit attacked the hijacked vessel from different directions in two motor-powered rubber boats. The pirates opened fire and the special forces team fired back. Two of the five pirates were killed, along with Florent Lemacon, the owner of the (TANIT), French media said. The military rescued Lemacon's wife and 3-year-old child along with two friends of the Lemacons
(CNN).
.
4. INDIAN OCEAN: Attacks prompt new piracy advisory, 7 Apr 09. Following a series of attacks off the eastern coast of Somalia, Combined Maritime Forces issued an updated special maritime advisory message. The message highlights several recent attacks that occurred hundreds of miles off the Somali coast and states that merchant mariners should be increasingly vigilant when operating in those waters. "We continue to highlight the importance of preparation by the merchant mariners and the maritime industry in this message," said Vice Adm. Bill Gortney, commander, Combined Maritime Forces. "We synchronize the efforts of the naval forces deployed to the region. However as we have often stated, international naval forces alone will not be able to solve the problem of piracy at sea. "Piracy is a problem that starts ashore." The notice also reiterates the fact that despite an increased naval presence in the region, ships and aircraft are unlikely to be close enough to provide support to vessels under attack. The scope and magnitude of problem can not be understated. The area involved off the coast of Somalia and Kenya as well as the Gulf of Aden equals more than 1.1 million square miles (2.5 million square kilometers), roughly four times the size of Texas or the size of the Mediterranean and Red Seas combined. The length of the Somali coastline is roughly the same length as the entire Eastern Seaboard of the United States. Ships and aircraft of Combined Task Force 151, the European Union, NATO and a number of international navies continue to patrol the region, but the closest military ship could be days away from a merchant vessel sailing hundreds of miles off the coast. While maritime patrol aircraft from a number of nations fly counter-piracy missions, the same aircraft are also providing critical support to coalition forces operating throughout the region. Despite the recent successful attacks, merchant mariners have proven successes as first-line defenders against pirates. A number of merchant vessels have employed evasive maneuvering and other defensive measures to protect their ships and their cargoes (Marinelog).