In a statement, the company confirmed that the U.S.-flagged vessel has 20 U.S. nationals onboard.

Cmdr. Jane Campbell, a spokeswoman for the U.S. Navy's Bahrain-based 5th Fleet, said that it was the first pirate attack "involving U.S. nationals and a U.S.-flagged vessel in recent memory." She did not give an exact timeframe. 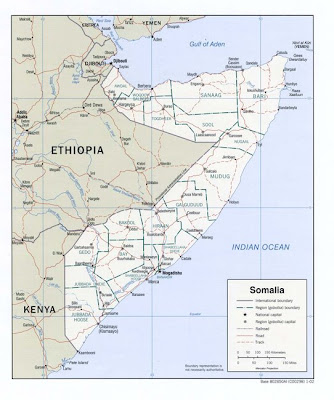 The U.S. Navy confirmed that the ship was hijacked Wednesday at 0430GMT (12:30 a.m. EDT) about 280 miles (450 kilometers) southeast of Eyl, a town in the northern Puntland region of Somalia.

The ship is the sixth to be seized within a week, a rise that analysts attribute to a new strategy by Somali pirates who are operating far from the warships patrolling the Gulf of Aden.

A special warning message has been issued by Combined Maritime Forces out of Bahrain:

The message highlights several recent attacks that occurred hundreds of miles off the Somali coast, and states that merchant mariners should be increasingly vigilant when operating in those waters.

“We continue to highlight the importance of preparation by the merchant mariners and the maritime industry in this message,” said Vice Adm. Bill Gortney, the Commander of the Combined Maritime Forces. “We synchronize the efforts of the naval forces deployed to the region. However as we have often stated, international naval forces alone will not be able to solve the problem of piracy at sea. Piracy is a problem that starts ashore.”

While the majority of attacks during 2008 and early 2009 took place in the Gulf of Aden, these recent attacks off the eastern coast of Somalia are not unprecedented. An attack on the large crude tanker Sirius Star in November 2008 occurred more than 450 nautical miles off the southeast coast of Somalia.

The notice also reiterates the fact that despite increased naval presence in the region, ships and aircraft are unlikely to be close enough to provide support to vessels under attack. The scope and magnitude of problem can not be understated. The area involved off the coast of Somalia and Kenya as well as the Gulf of Aden equals more than 1.1 million square miles (2.5 million square kilometers), roughly four times the size of Texas or the size of the Mediterranean and Red Seas combined. The length of the Somali coastline is roughly the same length as the entire Eastern Seaboard of the United States.

UPDATE: A quick analysis of this capture points out how unusual this seizure is. The ship has a relatively high freeboard (which has proved a deterrent in the past due to the "boarding ladders" used by most Somali pirates), is a container ship and is capable of speeds normally thought to be beyond those at which the Somali pirates have successfully attacked ships. Further, this ship flies an American flag - thought by many to be a deterrent in and of itself to the Somali pirates - why stir up the U.S if you can avoid it?

It may be that, just as some Somali pirates have shifted their operations to areas where the various naval forces are not out in force, they are also adopting new techniques to increase the pool of available ships they can successfully attack. Pirates in the Strait of Malacca have long been boarding vessels of this type and at speeds greater than those the Somali pirates. It may be there is some expertise being shared . . .
Posted by Mark Tempest at 4/08/2009 09:05:00 AM