Something for everyone in SecDef's speech the other day at the Air War College, which can be read in its entirety here. Of course, I was interested in this section:

Finally, I concluded we need to shift away from the 99 percent “exquisite” service-centric platforms that are so costly and complex that they take forever to build and only then in very limited quantities. With the pace of technological and geopolitical change, and the range of possible contingencies, we must look more to the 80 percent multi-service solution that can be produced on time, on budget, and in significant numbers. As Stalin once said, “Quantity has a quality all of its own.”
This was a major consideration with shipbuilding and air superiority. I recommended accelerating the buy of the Littoral Combat Ship, which, despite its development problems, is a versatile vessel that can be produced in quantity and go to places that are either too shallow or too dangerous for the Navy’s big, blue water surface combatants. As we saw last week, you don’t necessarily need a billion-dollar ship to chase down a bunch of teenage pirates.

Well, you do if all you have are billion dollar ships and an unwillingness to break out of "big Navy" thinking. His solution of the LCS at 1/4 of a billion dollars each doesn't seem all that cost effective to me, especially since I would hope we would have the Somali pirate problem under better control by the time the LCS fleet is delivered in numbers sufficient to make a difference.

If it's time to think out of the box, then it's time to use ships that are available now or within 6 months to fight pirates. The solution doesn't have to be elegant - there are a lot of options for rugged enough, fast enough ships to provide escorts for merchants in numbers (it does seem odd, doesn't it, to have the Secretary of Defense quoting Stalin?) sufficient to make a nearly immediate impact.

I have made proposals before about less-than-elegant solutions - see Kludge the Pirates!, An Anti-Piracy Vessel and a Low Cost Anti-Pirate Helicopter Carrier. I even took the ideas to a bigger forum
Department of Crazy Ideas: How about a cheap inshore fleet? at the US Naval Institute Blog. One of may posts was called How to Make the Navy Bigger, Sooner, Cheaper.

Now, the feedback was that the Oilfield Service Vessels I proposed using were not "ideal " platforms. To which my response is, cleverly, "So?" To quote another famous person, "The best is the enemy of good enough." 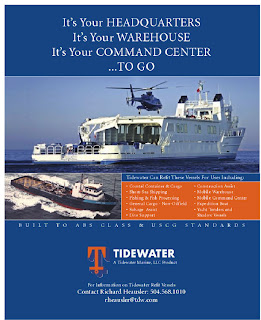 Got suggestions of your own? Let's hear them...