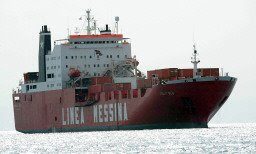 Pirates keep trying, most ships keep evading, as in the case of the Italian Ro-Ro (roll on - roll off) Jolly Smeraldo:

The Jolly Smeraldo was 300 miles south-east of Mogadishu when a small boat with seven pirates aboard approached it, according to reports.

The pirates fired at the vessel but none of the 24 crew - including 15 Italians - were harmed and the ship was able to make diversionary manoeuvres to escape.

The Jolly Smeraldo left Mombasa in Kenya on Tuesday and is headed for Jeddah in Saudi Arabia before returning to Genoa.

UPDATE: Apparently there were a couple of attacks:

Somali pirates attacked the Italian merchant ship the Jolly Smeraldo on Thursday for a second day in a row but it managed to escape, the Italian coastguard said.

"The ship was attacked twice, first at around 0600 (0400 GMT), and then again around two hours later," a media spokesman told AFP. "Several gunshots were fired both times, but without causing any damage, thanks mainly to the skill of the ship's crew."

The first attack on the ship en route to Saudi Arabia occurred some 270 nautical miles from the coast of Somalia. The Jolly Smeraldo also survived a pirate attack Wednesday.
***
Attacks surged this month as calm seas allowed them to approach their prey more easily and dodge a growing naval presence in the region.