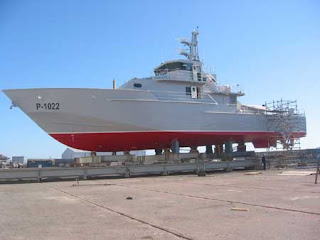 An email report from GOAGT.org:

Hot off the press, Yemen Navy deployed several of the Austal 37.5 mtr fast patrol boats that we use for escorts and surrounded the Qana just north of the IRTC, there was a stand off for 1 hour then 11 pirates put their hands up and gave up – The Yemen Navy made it very clear – release or we are storming the ship and you will all die – they gave them 10 minutes to decide.

This is a huge Victory for the Yemen Navy and a positive signal that they will not allow this to happen in their back yard...

This a follow-on to the report of the capture of the Qana contained in this.

Yemeni special forces Monday freed a Yemeni oil tanker seized by Somali pirates in the Gulf of Aden, killing three pirates and capturing at least nine on board, a government official said.

The ship, named Qana, was seized by Somali pirates off Yemen's coast Sunday but was empty of oil cargo. The deaths Monday took to five the number of pirates killed as Yemeni forces battled for two days to take back the vessel.

They were escorting the tanker to the Yemeni port of Aden on the southern tip of the Arabian Peninsula.

UPDATE: An ealier Yemeni success. Training for the Yemenis has been provided by the U.S. Navy and the U.S. Coast Guard. 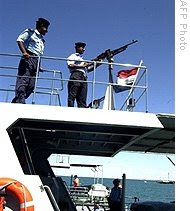