Anniversary of the Port Chicago explosion 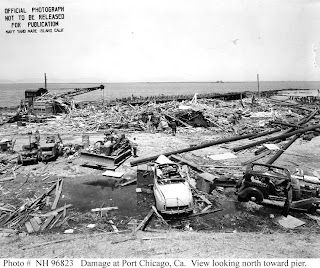 On the evening of 17 July 1944, the empty merchant ship SS Quinault Victory was prepared for loading on her maiden voyage. The SS E.A. Bryan, another merchant ship, had just returned from her first voyage and was loading across the platform from Quinault Victory. The holds were packed with high explosive and incendiary bombs, depth charges, and ammunition - 4,606 tons of ammunition in all. There were sixteen rail cars on the pier with another 429 tons. Working in the area were 320 cargo handlers, crewmen and sailors.

At 10:18 p.m., a hollow ring and the sound of splintering wood erupted from the pier, followed by an explosion that ripped apart the night sky. Witnesses said that a brilliant white flash shot into the air, accompanied by a loud, sharp report. A column of smoke billowed from the pier, and fire glowed orange and yellow. Flashing like fireworks, smaller explosions went off in the cloud as it rose. Within six seconds, a deeper explosion erupted as the contents of the E.A. Bryan detonated in one massive explosion. The seismic shock wave was felt as far away as Boulder City, Nevada. The E.A. Bryan and the structures around the pier were completely disintegrated. A pillar of fire and smoke stretched over two miles into the sky above Port Chicago. The largest remaining pieces of the 7,200-ton ship were the size of a suitcase. A plane flying at 9,000 feet reported seeing chunks of white hot metal "as big as a house" flying past. The shattered Quinault Victory was spun into the air. Witnesses reported seeing a 200-foot column on which rode the bow of the ship, its mast still attached. Its remains crashed back into the bay 500 feet away.

All 320 men on duty that night were killed instantly. The blast smashed buildings and rail cars near the pier and damaged every building in Port Chicago. People on the base and in town were sent flying or were sprayed with splinters of glass and other debris. The air filled with the sharp cracks and dull thuds of smouldering metal and unexploded shells as they showered back to earth as far as two miles away. The blast caused damage 48 miles across the Bay in San Francisco.

National Memorial info here. More here from a Merchant Marine view, including the names of the mariners who died as well as info on the U.S. Navy Armed Guard members who died. According to this,

About the "mutiny" and "court martial" that followed here and here.

And, perhaps, some good that came out of the damage:

Port Chicago would also lead people to examine their society. There was growing resentment toward the policies of racial segregation throughout the nation. The Navy opened its ranks to African-Americans in 1942, but men served in segregated units supervised by white officers, and opportunities for advancement were extremely limited. The men assigned to the ordnance battalion were African American.
***
The explosion and later mutiny proceedings would help illustrate the costs of racial discrimination and fuel public criticism. By 1945, as the Navy worked toward desegregation, some mixed units appeared. When President Harry Truman called for the Armed Forces to be desegregated in 1948, the Navy could honestly say that Port Chicago had been a very important step in that process.